I want to offer a reminder to pet owners--pay attention to any changes in your pet's behavior. They could be in pain and need something done.

Our old boy (10 yrs as of Oct. 10) wasn't eating as he usually does, so the vet gave him prednisolone for his IBD. That didn't work for his appetite--it still decreased. He got really picky about food. So, I took him in for an exam of his teeth and they confirmed he needed his teeth cleaned. Today is the day of his cleaning, but they discovered some bad teeth, so he's having some extractions. I hope he feels better once he recovers from this.

He's been pretty clingy for a while, which he was anyway, and then especially after our old girl died in January. As he was getting over her death, he started getting more clingy, as if trying to say something was wrong. Now, we know what he was trying to say, besides just being Mister lovey-dovey Dargo. 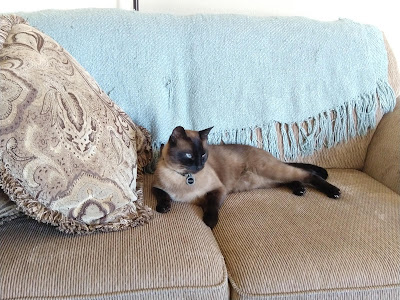