I didn't get much done on MESSAGES this weekend, although I did get the stinger scene for Book 13 rewritten. While editing Book 12, I hit on something near the end that inspired me to write a different stinger scene for 13 than I had originally planned. I think it works much better now. That was only part of the reason that I didn't quite finish the latest round of editing (but am very close).

The bigger reason I didn't get much done this weekend is simple - home improvement project. Our neighbors inspired me to try growing grapes, so I bought a couple of starters from Gurney's to plant. However, I didn't want to plant them before we had something for them to grow on, so we planned out a trellis and where to put it. 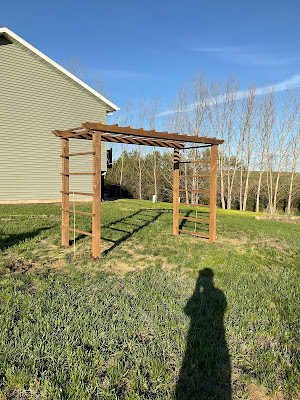 It was a beautiful but windy weekend here. Hubby and I put up this trellis for the grapes (and probably cucumbers, instead of putting those in the garden, leaving space for other fruits and veggies). We found a picture online of something we liked (similar to our end product) and decided to make it our own. We designed and planned, figured out materials, and put it together.

It was a b*tch to get those corner posts square to one another, though, which is the only way to make the rest of it fit together. Those took a whole day to get dug (3 feet in the ground) and situated straight up and down and square to one another. The rest went up fast today, along with cutting the tops of the 4x4 corner posts level with one another. The ground is uneven, so we leveled everything. We also situated the 2x4's about 1/16" above the tops of the 4x4's, which was perfect for the cross-pieces (2x2's) along the top. Before screwing on the 2x4's, we gave the ends of those a little angle cut to dress them up.

I'm very happy with how this turned out with just a little know-how and planning. It was a team effort. We both had our parts, and mine was more than standing around. I actually get my hands dirty on projects like this and know what I'm doing around power tools and woodworking, as well as designing and planning. Of course, the tools are his, and he has to feel like he has some control, so you know I let him do that work. 😉 (But without me, he would have had a mess on his hands.)

After we finished the project, I planted a grape plant on each side. Hopefully, in a year or two, we'll have grapes! Eventually, maybe I'll even learn how to make our own wine.

Now, I'm getting back to editing Book 12. I want to finish it and get it published in the next ten days, if not sooner.