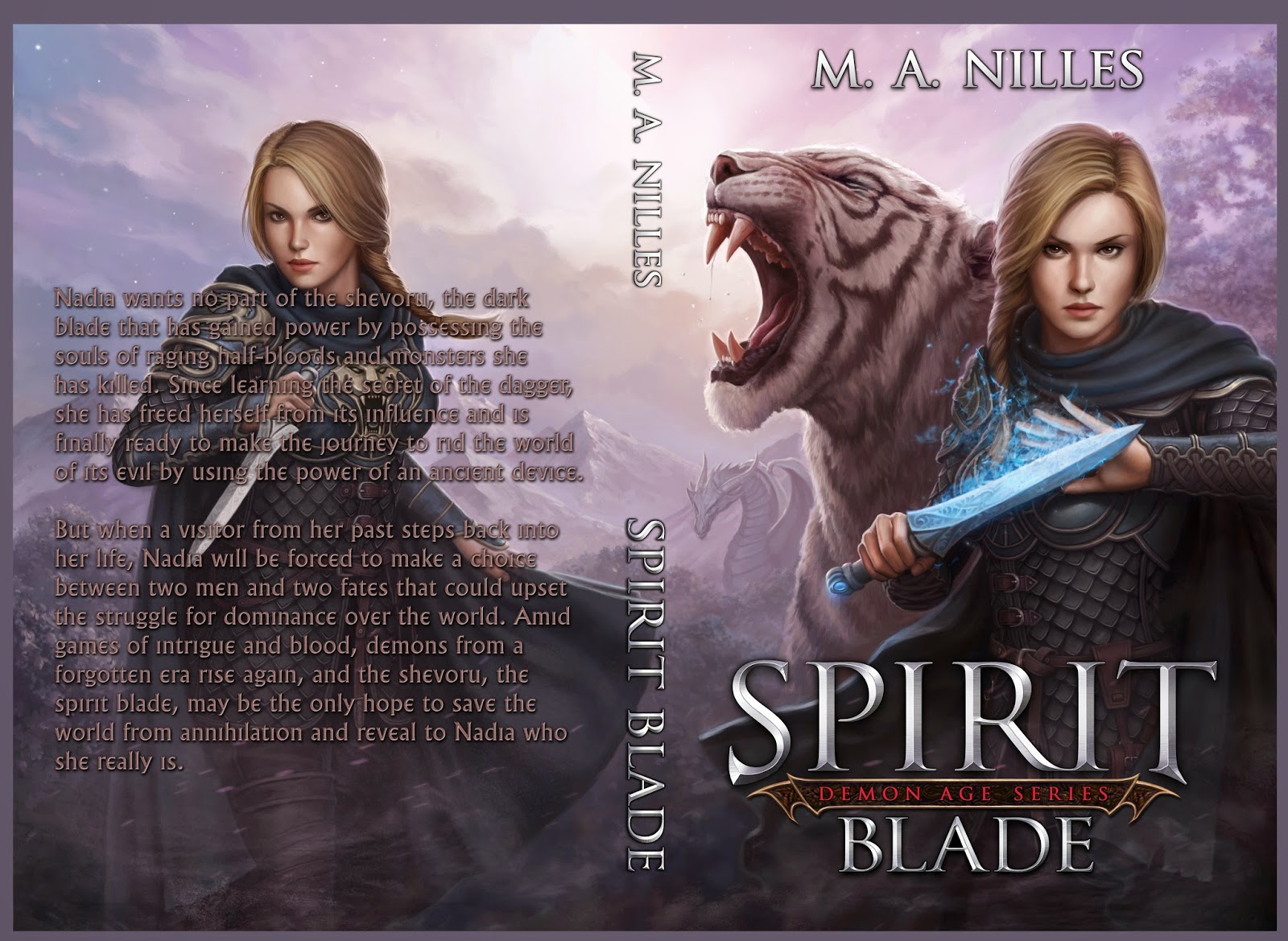 It's time for some signed paperbacks! Here is the full cover as designed by Paul Davies with the back text and border added by me. (Note: the paperbacks don't have the border on them. This is only for print-cutting purposes.)

It's beautiful artwork, worthy of poster status. If not for the story between covers, the artwork alone is worth entering. I adore this cover and the details. Note the armor details on the back cover image for a hint of the story, along with the dragon on the background of the front cover.

To enter, you need to be a Goodreads member in good standing, but I also will be hosting a giveaway on Coffee Time Romance. This is a romantic fantasy story with a rich palate of characters and world-building.

For the Goodreads giveaway, click here: https://www.goodreads.com/giveaway/show/108876-spirit-blade . I'll have the CTR link soon. The giveaway for that begins tomorrow.

If you don't want to wait, you can pick up the first two parts of the story as free ebooks from any retailer or the first part from my website at melanienilles.com.

And if you want more to read, the book that takes place before this is available. Pick up Tiger Born from any ebook retailer.

Posted by manilles at 1:49 PM No comments:

My hope to ride Beau again is down the drain. I thought the Dex reducing the allergic reaction to his rabies shot might be the answer, along with some chiropractic work. However, Beau showed me tonight that he's still very sore. And it seems that the more I tried to work on him with some light stretches, massage, and general body work, the worse he became...This after he was apparently bucking and running up a storm in his turnout this morning. It broke my heart to see him try to lay down to roll on his right side and then not be able to go down all the way, probably because it hurt so much.

I brought my saddle home tonight. Now, all my hopes rest in Trigger, and that's a big "if" of a challenge considering whether I'll ever ride him or not. I suppose I should be thinking when rather than if. It will just take more time to get that one accepting of things.

I'm done, though. I've put in all the time and money and hopes and prayers that a person can. Beau has finally injured something or developed some condition that makes his right hind leg sore. It's not in the foot but higher up somewhere between the stifle-hip-pelvis. I give up. It's been too much for me dealing with all his problems. He couldn't even lay down to roll tonight on his right side. It just hurt too much.

I kind of wonder if this doesn't go back to when he had ulcers last year and had trouble with the right side. It improved some with treating the hind gut, but it was never truly the healed to how it used to be. I don't have any more money left to investigate this. Either he heals by next spring or...

I just don't have anything left emotionally to give.
Posted by manilles at 8:50 PM No comments:

Many of us are aware of what happened to Robin Williams. Depression is not an illness that is easy to see in another or even to identify within one's self. I know. I've had my share of downs.

I'm writing this because I recently suffered the worst depression in years. It used to plague me when I did daycare, but I've been good for a long time since getting out. Maybe that was why it hit so bad again--I did some summer childcare this past summer. Something about that stress brings it on; there is just too much stress. The downward spiral was already in motion when they were done, however. And then news stories and a slow down in ebook sales sent everything into a nosedive.

Depression is a soul-sucking monster that whispers lies and conspiracies about even the most innocent of ideas. I started questioning everything about myself. I felt worthless and scared. BUT I've been through this before. I was able to give myself moments of clarity, brief as they were, by reminding myself why it was happening. It was a struggle and I kept in mind the statement by Wil Wheaton: "Depression lies". It lies to you about your accomplishments, belittling everything and questioning your right to even modest achievements. It lies about other people, close friends and loyal family, turning them into backstabbers or making you feel that you did something wrong for which they are mad (especially those who never seem to take anything the wrong way) and telling you that you're not worth their attention. It steals your interest in your passions and makes you feel like there's no light left in the world.

I've suffered bouts of depression before, so I was aware of it happening when it attacked this time. That didn't make it any easier to deal with, especially since this was the worst it's ever hit. It had me in tears many times, hiding and lonely yet short-fused with my family. It was more vicious this time than ever, knocking me out to where some days I came home from a new job that helped distract me for a short time only to crash on the bed and be unable to get up the rest of the afternoon and evening. The job has been my saving grace by making me feel valuable again, a flicker of light in the darkness.

I've been able to stay off medication for some time. I don't like staying on meds for any reason. But after almost three weeks of some days feeling normal but mostly feeling awful about myself and my life, I decided to get into my doctor, or nurse practitioner in this case. I have a new prescription now, but I'm also waiting on blood work. Depression can be a side effect of something else going on in the body, and I'm not young any more. Parts will start to fail. I understand that. But that doesn't mean I can't do something about it. I would rather treat the problem than the symptoms. For now, however, I will do what I must to go on.

No one knew I was suffering. It's a silent illness and we learn to mask it to the outside world. Don't take that smile at face value. Behind it may be tears.

I've written about this before, and I do so to open the eyes of people. Until you've been through this, you don't know what true depression is. But for those who suffer, knowing that you're not alone and being able to recognize the lies of this beast are two vital keys to winning the battle. Seeking help from a medical professional is the third.
Posted by manilles at 4:42 PM 2 comments:

about the Forgotten Worlds series length

I can see that pre-orders have slowed for book 5 of the Starfire Angels: Forgotten Worlds series. I can only guess as to why, since I feel t...

Melanie is an avid animal lover and science fiction and fantasy junkie (and SFWA member) who loves everything from social to cyberpunk science fiction and epic to urban fantasy. She is also an equestrian of over 35 years and, in that time, has trained in all disciplines from western to english, with a shift to dressage in her adult life and membership in USEF. She is a slave to four cats and a family that keeps her busy.
Thank you for visiting. You can find more about Melanie on her website at www.melanienilles.com or at her new page on MeWe at https://mewe.com/p/melanienillesauthor.
(Note: Melanie is NOT active on any social media outside of those stated above. Any social media use of manilles or melanienilles not mentioned here are not her accounts.)