my Buddy and me

For those of us who grew up in the 80's, that subject line should trigger the memory of a pair of dolls advertised for boys and girls.

In this case, I'm actually referring to my horse, Buddy. He's come a long ways in the seven weeks I've had him. We had to overcome ringworm and he would barely let me pick up his front hooves, forget the hind legs.

Buddy is now ringworm free and nine days ago had his teeth tended to by a veterinarian who specializes in equine dentistry. I was somewhat surprised by the difference that I saw in him after that. While it no longer surprises me that removing an animal's pain (or a human's!) can make a BIG difference in how cooperative and relaxed they become, I was surprised at the changes that came from having the teeth tended to. Buddy had two wolf teeth removed and all sharp points and hooks floated. At least one of those was causing a sore at the back of his mouth.

I also learned that he's only 2, not the 3 years that was listed in the sale catalog for the auction where I bought him. Not a bad thing, but it means I'm definitely not pushing him for training over the winter.

In fact, since having his teeth done, he suddenly decided that trusting me with his feet wasn't such a big deal. We had been making slow progress, particularly with the front feet, but even that still brought on a bit of a struggle after a short time on three feet. Now, he's even let me hold and pick out his hind feet.

And now, I can attack the thrush that's deep inside his central sulci, which were pretty well closed off by an overgrowth of frog tissue, and his collateral grooves. And I know exactly how to handle this after dealing with Beau's poor feet. Buddy was good about letting me open up those areas with a hoof knife to his front frogs (hinds looked like someone had taken care of them at some point). But I couldn't believe his reaction when I took a cuticle tool into his hooves and dug out the deep-down gunk inside them. His tense acceptance of letting me work on his hooves became instant relaxation! It was as if he exhaled a great big "THANK YOU!"

After giving all the grooves, especially the deep central sulci of the front hooves, a good cleaning, I filled them with a mix of triple antibiotic ointment and clotrimazole, aka "Ramey's goo". I'll have to stay on top of this for at least a couple of weeks, but my fingers are crossed that we can finally get this boy as sound as he is otherwise healthy. Seeing his mincing, toe-first steps has been frustrating; but at least I know that this is treatable.

He's one lucky horse! Ten years ago, I would not have known what to do for him. But after all I did for Beau, he gets the benefits of that knowledge.
Posted by manilles at 4:52 PM No comments:

I finally have lots of pics of Buddy. It's been four weeks today since he was brought to where I've been boarding and he's transitioning to pasture very well. He's put on weight since the ulcers have healed (he had all the signs that I recognized). With that, he's calmed down a lot, although he was never a nut or anything to begin with. For him, however, he's gone from behaving like a typical young horse to a mature horse.

And his ringworm is healed and the hair has mostly filled in. Thanks to the vet who recommended miconazole, he looks like a beautiful large pony/small horse. I still have to measure to get an exact height. He's a beautiful color and in an adorable little package with a sound mind that I feel will make him a great horse for my kids to share with me.

So, without further ado, here are pics of Buddy and me with Buddy (finally). I'm 5 foot 2 inches, so you can get a fair comparison of his small stature... 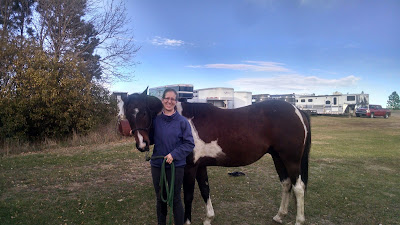 See...He's not very big. Good things come in small packages, and forsaking all modesty, I mean both of us :) 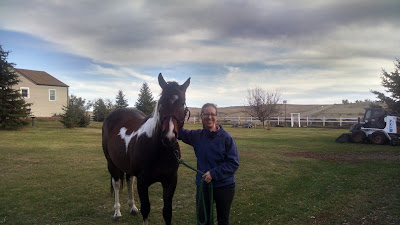 ps--he's the perfect horse at this time in my life, just as Beau was the perfect horse for me before this. Buddy is my twelfth horse, if you count the ones that weren't really "mine" but were mine in name. Twelve is a great number, as was Ten.
pps--It's hard to believe that he didn't know how to be spoiled four weeks ago, but he's learned to nibble at my pocket with the treats now.

Posted by manilles at 6:04 PM No comments:

Now that Illusions of Truth is out and getting read (every writer's dream), I'm giving consideration of what to do when the 90 days of initial KU is up, as well as when The Lereni Trade's time in KU is up.

I'm thinking of putting together a couple of anthologies of the short stories in my list, one for all the Starfire Angels shorts/novellas and one for a general romance anthology of shorts/novellas.

Or should I just put them together in those groups?

I'm thinking an anthology price of $4.99 would be fair for ebook anthologies, since they'd be 99c and $1.99 stories separately.

Or should I make one anthology of about 6 of the best or most romance-centric of these? If so, which six? (I'm thinking WAC, Shards, TLT, IoT, AtWE, BtCW) If so, I'd probably price an anthology like this at least $4.99 plus put together a paperback edition. I like larger anthologies myself.

I could have any of these ideas ready for Valentine's Day. But what do readers want?
Posted by manilles at 1:36 PM No comments: