FERIOUS (Forgotten Worlds 9) is pretty much done, except for that last scene that I like to insert that's unrelated to the individual story but will come into play in the overall series. So, I'm reading through it this weekend, doing some edits, and getting an idea of the general flow before I add that in to finish it.

As with anything that challenges me as a writer, I put in the effort and it ended up working well for this. It's a bit difficult considering the timelines jump back and forth while advancing. It's not really told in flashback but in parallel timelines--one for the present and one going back to intersect with the present action and from there finishing the story. It's an unconventional format but it's what had to be done. It's just how the story decided to be told. Other writers will understand what I mean, but readers may not.

When I write, I let the story dictate everything. Sometimes there's just a different way of telling a story that works best. I was worried about this one, but now that I see it all together, I like it. I don't know if readers will, but I do. This one just couldn't be told any other way and still be interesting, imho.

Part of what's holding me up on the last scene isn't so much the flow of the story but thinking ahead to Book 10. I intend to tie that final scene into the next book, which will be another heavy on Paxon involvement like Book 5 was; actually, even more so. But I planted some seeds in prior books that may be touched on in FW10. For that matter, I've been planting a lot of seeds throughout the series so far that won't germinate into their full bloom for some time down the road. However, astute readers may be making some inferences and connections.

Hold onto your hats!

There are six books available now and a seventh soon to be released. Be sure to pre-order REMNANTS after catching up on the first six! 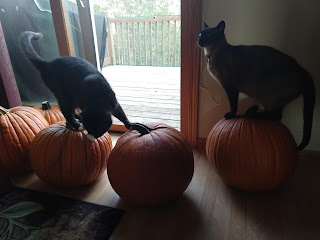 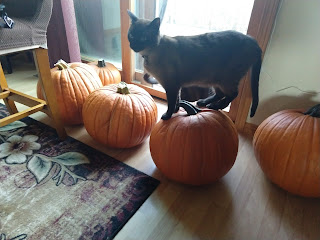 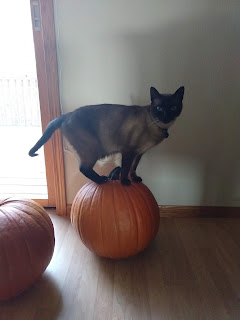 The pumpkins were all we got out of our garden before we had our first frost. These are going to soon have their seeds roasted and their flesh baked and pureed to be frozen for later making pumpkin treats.

Posted by manilles at 9:28 PM No comments:

A great day to be alive

It's all in our attitude. An attitude of gratitude is the best way to get through the day, every day. It's a great day to be alive!

Even better is a beautiful, perfect Saturday for doing anything, like visiting with my mom and riding my horse. And it was a wonderful ride out in the fields around the farm. Buddy was much better than I expected and actually almost trail horse calm. Jewel was her usual dumb ass self. (She is a mini donkey, so an actual ass.) She'd graze then come running up on us. Buddy got so used to it that, by the end, he didn't bat an eye or an ear at her antics.

At one point, I thought Buddy wanted to itch his head as he was doing throughout our ride, but then he started to put his head down in that way that horses do when intending to roll, and I yanked it up fast and started him moving again. He hasn't done that in a few years. 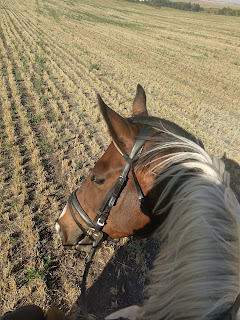 I doubt I'll get any more days this perfect. I'm glad we had one more great riding day. I'm dreading a long, cold winter from the La Nina effect. I haven't ridden much this summer, but it was too hot for a while or I was too busy or not feeling good from my autoimmune issues. Oh, well. Buddy is doing well all the same, fat boy that he is right now. Nature is preparing him for what's to come.

And on the long drive there and back, I had a lot of time to think about Forgotten Worlds book 9. I know exactly how it will fit the title I had planned. Since it is coming together so well, I can announce that the title is FERIOUS. If you know the characters, you'll recognize that it is not a misspelling but a play on the name of an important species in the series.

Posted by manilles at 9:44 PM No comments: