RACING THE ORAST BELT is complete. The first draft sits at 46,700 words before the next round of editing. Since I have already done some major rewrites on it, that shouldn't involve too much. I think the rewrites that I put into it between final edits on DISPOSITION OF DREAM and writing the final chapters of RtOB should have fixed most of the issues that I felt might be a problem. 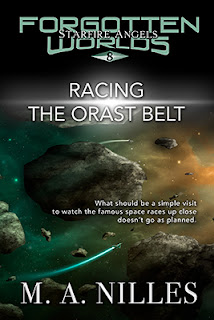 I will update my website and series page of this blog with the new details soon.

Also, pre-orders of Remnants are going live now. Look for that from major retailers. And be sure to sign up on Amazon or Bookbub to receive alerts when new books are available.

If you haven't already picked it up, the latest Forgotten Worlds book is now available (as of last Thursday). DISPOSITION OF DREAMS is book 6 in this ongoing series.

Next up is REMNANTS (book 7). That will go up for pre-order sometime this month. The description needs to be finalized on that first. I will reveal that and the cover when it's ready. Since the writing on this one started off so difficult, it's put my publishing schedule behind where I wanted to be. My schedule of new releases is delayed, and I expect this release date to be sometime around the end of October or early November.

Right now, I'm finishing up the first draft of RACING THE ORAST BELT (book 8). I had some issues with the writing before I broke from it to edit DoD. The gap to edit, however, has allowed me a chance to get away from the story and gain a fresh perspective. Now, I see where I went wrong and rewrote some scenes and am doing better with writing from where I left off. Sometimes a break is all that's needed for the head to clear. This was supposed to be an easy book to write, but that didn't work out as I expected. It developed a different plot, which is better than the original idea I had, so it became more complicated to write.

Once that's done, I'll be on to writing book 9.

For now, you can catch up on the first six books: 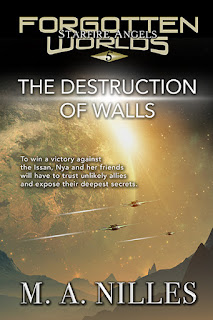 Today was a good day to see my boy. I haven't had many good days like this--either the weather has been crappy or I've been dealing with chronic fatigue issues. I haven't been out to ride in two weeks, but I started a new medication that has given me back my focus and energy. And in the two times I've been out to him since we helped sort cattle, I did manage to resolve some issues with Buddy.

I've confirmed that the reason he's always been so difficult is because he has tummy issues. I suspected it, but after seeing a small but noticeable difference in his behavior after giving him Smart Digest Ultra before I work with him, I tried adding a couple of other supplements. The best combination seems to be the Smart Digest Ultra and Aloe Vera pellets (also from Smartpak). So far, the two times I added aloe vera, he turned into mister mellow, as a horse of his type should be.

And after he put his tongue over the bit when we were sorting cattle early in June, I tried a couple of different bits. The advice I found online was to allow room for the horse's tongue. The bit I was using (which he put his tongue over) allowed that, so that didn't seem right, especially when I put a curb in his mouth with a roller, which doesn't allow any room for the tongue, and that quieted his mouth. So, with my instructor's advice, I tried a double bridle. He didn't like that, but he did go nicely with the bradoon of that combination. Today, I put just the bradoon on his regular bridle headstall. He was fantastic! The bradoon is a loose ring, narrower snaffle than my other snaffle mouthpieces, and it's a special alloy and straight, not curved for tongue room. He was much quieter with his mouth than I've ever experienced (except in the sweet iron curb with the roller, which quieted his mouth a lot also). I think that, in Buddy's case, He needs the bit to be as flat and still as possible, and the special metals of each of the bits that quieted his mouth probably played a part also.

I'll stick to the bradoon for this summer, along with the two supplements before we ride, and see if I finally found what works to turn him into the trailriding horse I've been trying to train him to be for nearly five years, and turn him into a true cowhorse, complemented by our dressage training, which we will continue. My only worry is that if he gets excited, the bradoon won't be strong enough to stop him. We'll see.

I also started taking out the fly sheet I bought last year but never used. I decided to put it to use this year. I can't leave it on him when I'm not there because of the danger that he could get tangled and get hurt (not to mention the trashing of the sheet and my money down the drain), but I can let him wear it and have some relief from the flies by taking it with me when I go to catch him in the pasture and let him wear it on the walk to the barn or, like today, after we ride and I let him graze a while just to spend more time with him. It's a closed front sheet, so I have to put it on over his head, but he's so smart, he loves having it on after just the first time, which wasn't bad either. He already knows it means relief! Buddy is super smart though. I wonder how long until he's sticking his head through the neck opening on his own when I hold it up ;) 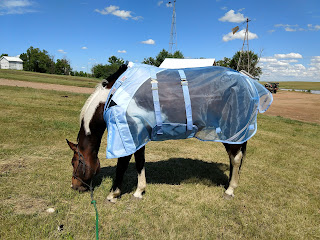 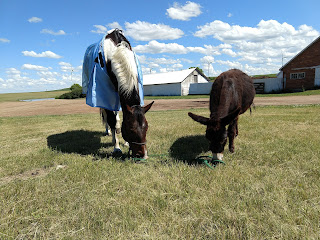 Later this month, he'll finally get his annual dental work done. That was postponed due to coronavirus.

Posted by manilles at 7:58 PM No comments: