It's been two weeks since I posted about having started writing Book 13 of Starfire Angels: Forgotten Worlds.

I have some updates about that.

First, I feel that the title I had assigned before writing, knowing what I did of the plot, is going to fit just right. I have these plots outlined, if not fully planned out, far in advance (pretty much for the entirety of the series). However, by the time I get to a story in a series, much can change. In the books between, the characters change and some of the details are fleshed out that I didn't have while outlining. That can affect how a book planned far in advance actually plays out. However, the basic plot of this is strong enough to keep the title I had planned -- SOUL SHADOW. I could give it another title, but I feel that this is still perfect.

How do I know? I currently have a third of the first draft written (almost 15,000 words to date already) and know what needs to happen to finish this story of L'Ni's secrets and Issan secrets. I've discovered some new things, which is always exciting, although not enough to change it significantly. It's no fun trying to write a story when you know everything. Rather, the discovery of new details are what makes writing exciting. I like some surprises in writing. I will have some surprises yet in this, but I mostly know the scenes I need to write. The surprise is in those little details, such as discovering that not all Feri are considered Issan, although they all serve their god. I can't say anything more; you'll have to read why that is in the book next summer. The point is that I'm comfortable with what has been written so far that I know the title fits.

So much will be revealed in this about which I've been keeping tight-lipped since introducing the character. It's been so hard not to share things and still is. I want to talk about him so badly! And I still can't until sometime after I publish this, to give readers a chance to discover for themselves. But there are some bigger secrets that won't even be revealed until several books later than this.

Sorry, I like to tease. I am terrible at keeping secrets, which is why I'm kind of glad this series hasn't gained a big following at this time, because I'm not talking to anyone about it except on this blog, where I can edit my thoughts. If I actually spoke about it (rather that wrote my thoughts), I would surely slip up and give away one of those big secrets. So, there is a good thing about having a small audience so far. After those big secrets get revealed, I'll be ready for a bigger audience, because I'll be able to talk about it more openly.

Back to SOUL SHADOW... The other challenge will be finding a cover image for this, because ninety percent of the book takes place in L'Ni's memories. Those cover a variety of events throughout his life, even some from this series since his joining Nya and the others. But like the other books, I'll find images that embody some key piece of the story. I'll figure that out once I get closer to the end.

Now, onto something else... My website isn't working right. I updated something in Wordpress a few weeks ago, and the carousels broke. The pages are there, but the carousel with all the covers linked to the book pages are gone. I've hired a new web developer to remake the site completely. I had to pay a bit more than I wanted, but it will be worth it. I hope to have that ready soon to announce. I haven't yet seen the first iteration and it will probably require some tweaking before it's fully ready to announce, so it could be a few more weeks.

I'll announce the new website when it's ready. I'm excited for some new features. I'm considering a newsletter option from the website so that readers can subscribe and unsubscribe for announcements. I'll definitely have a feed to my blog so that you can see a tease of the blog posts right from my website. Aside from that, it'll continue to feature all of my series and individual books. For me, it'll have a great backend for easy updates. I'm familiar with the web developer's site management tools, which is why I know it'll be worth the price of development and annual maintenance. I just can't quit my day job, which is how I'm familiar with the web developer.

Once I finish writing book 13, I'll go back and finish edits on book 11, VOICES IN THE DARK and publish that. I hope to publish it in January 2022, but it depends on life and how well the words flow for book 13. (So far, so good, but there can be slow spells in writing or life events, which can all cause delays.)

Let me know what you think of the series so far. I'm always eager to know if readers have questions that I need to answer in upcoming books. I try to imagine what might be important but I'm too immersed to really see it from the outside. I know too much as the writer.

What did you think of the latest, DRAGON AND FURY?

Posted by manilles at 3:14 PM No comments:

It has begun... again

Since DRAGON AND FURY was published, I read again through Books 11 and 12.

A couple of days ago, I started writing Book 13. I now have the first chapter already written and am on the way to revealing L'Ni's backstory. I'm excited. I've known some of it since I introduced him but not all of it. I've been dying to share it but had to hold off, especially when he revealed the fact that he felt betrayed by his own people in Book 6. Now, I get to tell his story and reveal much more about the Feri in the Starfire Angels: Forgotten Worlds series.

I hope you're as excited as I am. This is going to be an interesting ride!

Now, if someone could just help me get his cat out of my lap...

Posted by manilles at 3:09 PM No comments:

My website broke. Typical... I allowed an update to an add-on and now the carousels with the books are broken. Such is my luck when it comes to websites.

So, I am going to have a new site created and hosted in a different format. It will take time, but until then, maybe I can figure out how to get the carousels working again.

Whether I do or not, melanienilles.com won't be down long, I hope. I will have a new site soon with a new look. Most of my books are also listed here through the tabs on this blog, although not with links to the stores. You'll have to search on Apple, Amazon, Barnes and Noble, Kobo, and other retailers to find my books.

Something I might consider in the future is to make my books for sale through my website. It won't happen right away. I'll have to evaluate the benefits and difficulties of making that happen before I decide if that's something I want to do. But it is a possibility.

So, if you dare to visit my site, you won't see all the books right now. I don't know how to fix it and don't have the skills or the time to fix it myself. I'd rather pay someone who knows what they're doing, instead of messing it up further.

Back to work on the next books.

Posted by manilles at 6:42 PM No comments:

It is done! DRAGON AND FURY is finished and published as of last night. It will take time to appear at all the online ebook retailers but is already at the major bookstores (links below image). 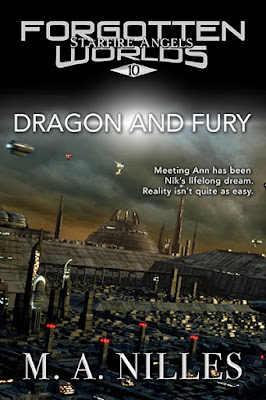