Playing with my Buddy lately (horse pics & a video)

Posted by manilles at 4:48 PM No comments:

New Cover for an Old Ebook

I finally did it. I gave A Turn of Curses the cover it deserves. In 2008, it was an L. Ron Hubbard Writers of the Future Contest Honorable Mention. In 2009, it became my first ebook.

Sadly, it got pushed aside by bigger, more popular books that I've published, and ATOC languished into obscurity, partly for lack of a good cover.

That has been rectified. I present the new and improved cover of this little ebook:

Nineteen year old Selina has a life many would love–praised, served, and spoiled. The only problem is she didn't choose that life, because it comes with a heavy price. She will soon die, like all Healers, when the mark of Y'dom completes its pattern around her neck, and hers is nearly complete. Her gift of healing powers are sought after by all, including the ruling prince of a neighboring kingdom to heal his ailing father. Seeing this as her last chance for adventure, she makes the journey to Vastorn.

En route she encounters Faldon, the fallen leader of the feyquin, and his band of rogues. Cursed by a demon and swearing vengeance on the human who shares his curse, Faldon does all he can to stop Selina from completing her journey. But he also knows how to save Selina, if she survives the night mares.

We've been harvesting up a storm from our garden in the last few weeks. Pumpkins and watermelons are coming out of our ears! And we've had plenty of those also from our corn.

We're sharing what we can't eat in a timely manner and freezing what we can save for ourselves. It's a lot of work, but we've processed four large pumpkins to obtain the seeds and around 4 gallons of pureed pumpkin, which is being distributed to friends and family with plenty to keep on hand for us.

And I and my youngest child loooove pumpkin! We make pumpkin muffins and breads. Because of my food restrictions, we bake using only gluten-free flours and less inflammatory oils than the standard canola or soy.

So, before I forget the thrown together ingredients that turned into the best gf pumpkin muffins I've ever made, I want to throw it up here for me and you. This makes about eight dozen mini muffins, or at least it did this time. It would probably make about three to four dozen regular muffins. 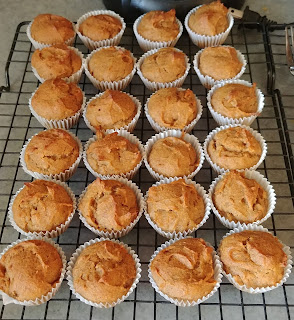 6 small-medium eggs
1 qt pumpkin puree
2 cups local honey
1/2 cup water (can be used to dissolve honey that has crystallized, simply put them together in a bowl and microwave for about 60-90 seconds on high)
3/4 cup grape seed oil
1 1/2 tsp. vanilla

Blend wet ingredients together then mix in the following:

Once the batter is all mixed evenly, spoon into the paper cups so that it reaches the top. Don't worry, as long as you use the xanthum gum with gf flour, they will not run. Pumpkin batter from this recipe is a bit thick and doesn't settle in the cup but keeps its form pretty well.

Bake at 350 F until the tops turn slightly brown and spring back with a light finger press. The length to bake them will vary depending on whether you use metal or silicon bakeware. I prefer silicon because the bottoms don't get burned when the tops are quite satisfactorily browned.

You can top these with frosting for extra flavor. I recommend a good cream cheese frosting.

Enjoy!
Posted by manilles at 7:05 PM No comments:

Nothing more. Just wanted to share some more recent pictures of my Buddy, my saving grace, the beacon of light through the darkness of the past two years of struggling with Hashimoto's and untreated hypothyroidism. Now that I am being treated, I'm moving ahead with his training and seeing encouraging results with him. 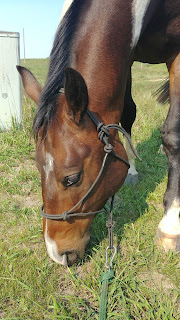 I often share these first on my instagram page at https://www.instagram.com/melanienilles_author/ .
Posted by manilles at 5:09 PM No comments:

The Diversity of SFF

I'm counting down to the day that Awakening is released! October 10th is coming soon. I've finished the first draft of Enlightenment. And now, I've updated this blog and my website with the most current information.

Awakening is available for preorder now.

What I am especially happy about is finding covers with a model who is closer to my envisioned main character. It's an alternative Earth-like world, and some of our world issues are touched on. Others are not, but that's the nice thing about fiction, especially science fiction and fantasy.

I love the covers and hope that readers do too. What do you think?

There have been controversies about whitewashing book covers, but I don't have those publishing qualms. I don't have those writing restrictions. I often write about aliens and monsters. I'm open to just about anything, which means I do not limit my imagination to the amount of melanin in someone's skin, the shape of their eyes, or any odd characteristics. That's what I love about SFF--it's liberating. It seems far more open to accepting something different. And in this case, Lilly is darker skinned. It is more common in Lilly's world than being light skinned. It's not our world. Ahlias is a "what if" world -- no Europe, no Africa. The setting is something that is unique but allows for a new perspective away from the conflicts of our world, a perspective of what could be if people were just people.

Sadly, I had a hard time finding a cover that fit. There are a lot of white models used on covers and few other races. It's time to start thinking outside the box for SFF. We have aliens of every color and shape in popular movies, comics, and books. It's time to accept more variety in the human characters also. I was very happy to work with the artist on these and to bring something different to readers.
Posted by manilles at 7:27 PM No comments:

It's been over a month since I last posted. Where does the time go?!

I work part-time outside the home and then take care of writing. I also cope with my health. That's something I wanted to address for those unfamiliar.

You may have read that stars like Zoe Saldana openly talked about having Hashimoto's. I am grateful for the exposure that celebrities with chronic illness bring to those issues. Those of us who also suffer want the world to be aware of them, not just so people can understand us but also because we want people to be aware that if they are also suffering, we may have an answer for them. We support each other in a worldwide community.

I have spoken before about having Hashimoto's, which has developed into hypothyroidism. There are two myths that I want to clear up.

Hypothyroidism is the underfunctioning of the thyroid. It can be due to the destruction caused by autoimmune disease (Hashimoto's), surgical removal of the thyroid, or RAI (radioactive iodine treatment). It can also happen because of malnutrition or starvation.

It's like saying Grave's Disease and hyperthyroidism are the same. Grave's is an attack on certain enzymes of the thyroid that cause it to increase hormone production (hyperthyroidism).

Myth #2: Hashimoto's is no big deal.
Fact: Um...Read what I just wrote under myth #1. Hashimoto's is an autoimmune disease. It is the immune system attacking the body. With any autoimmune disease, there are symptoms that cause suffering in misery, from brain fog to aches and pains. These come and go depending on the attack. Worst of all, with the attack on the thyroid comes swings from hyperthyroid to hypothyroid. Some people notice this more than others. Those who don't realize what's going on until they are hypothyroid permanently are the lucky ones. Those who suffer the swings, which can go on for years before the thyroid is finally destroyed enough to settle into a permanent state of hypothyroidism, are prone to insomnia, anxiety, and depression and are often diagnosed as bipolar. It is a rollercoaster that leaves the sufferer wishing for an end. Because of the swings, the standard testing can often look "normal", which is why it is so important that doctors check all the thyroid markers, not just the TSH, which is actually a very poor test of what is going on. (Every thyroid test should include free T4, free T3, TPOab, TGab, and TSH.) Conventional medicine often mistreats these patients as simply having a mental illness. That is a mistake as often antidepressants and anti-anxiety medications only make the patient feel worse.

Hashimoto's can be managed, like any autoimmune disease, but it is not easy. Starting with the autoimmune protocol diet and adding in thyroid hormones as necessary, reducing stress, and getting regular, moderate exercise go a long ways towards reducing the symptoms of Hashimoto's.

How do I know all this? I've said in past posts. I am a Hashimoto's survivor. It started over two years ago and I have finally started levothyroxine, which has made a big difference in the quality of my life. In some ways, I am lucky that I am able to convert T4 to T3 so easily that levothyroxine is all I need. However, I'm not so lucky in that I tend towards what is called Hashitoxicosis; my thyroid tends to overproduce T3, because of the low T4. The levothyroxine balances that out and supports my thyroid, calming it to reduce the combination symptoms of hyper and hypo so that my body only converts what it needs (instead of overcompensating--my body is an overachiever).

I had reached a point of wanting to quit everything and that included writing. However, thanks to finally treating the hypothyroidism, I have begun to sleep better and think more clearly. My memory has improved and I feel more calm. All that FT3 was making me feel like I had ADHD, and I had all those symptoms too. The best part is that I love writing again, because it's no longer a blur and a struggle. I feel like my brain is back and my life with it and I use that thought to keep me going through the autoimmune flares that make some days more difficult.

You can't tell someone is suffering when you see them. We tend to hide it, embracing what joy we can glean from life to carry us through the difficulties of our invisible illness. Please remember that anytime you encounter someone on the street or online, you don't know what they may be struggling with in their lives. If for no other reason, I ask that people be a little more thoughtful and considerate to each other.