I encountered this coming out of our neighborhood this morning (facing west): 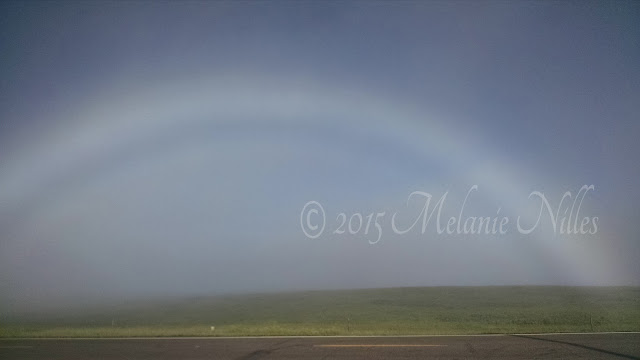 This morning mist rainbow occurred with the fog obscuring Bismarck, looking to the west with the sun in the east. I don't know if anyone has seen anything like this before, but it was a first for me. I'm glad I had my phone set on panorama!

ps--I didn't know such a spectacle was possible. Isn't nature amazing?
Posted by manilles at 5:22 PM No comments:

Want to know a secret about being a writer?

We're generally (there are exceptions) introverts. Our biggest fear is the rejection of others.

With the release of Awakening, I'm afraid of that readers will not like this latest effort of imagination and find everything wrong instead of enjoying it for what it is. Those who don't "get" our work frighten us.

That's true with anything in life. We all have fears. But there's the big secret writers keep from the world, despite the protestations of many. It may be buried deep beneath years of experience or on the surface of the newbie, but it never leaves us.

We want you to like our worlds as much as we do in creating them. We hope for the best but dread the worst.

While I could say I don't care what readers think, I still have to peek on the first reviews of a new work. It still matters.

Disappointing readers frightens the bejeebers out of us!

Nevertheless, we keep working, because writing is creating and we feel compelled to express our thoughts in the form of pictures through words.

Now you know the hidden secret.
Posted by manilles at 12:08 PM No comments:

Email ThisBlogThis!Share to TwitterShare to FacebookShare to Pinterest
Labels: writing

Thank you for all the feedback on the cover (from all sites)!

It seems that a modification of the second cover choice in my previous post has won out... 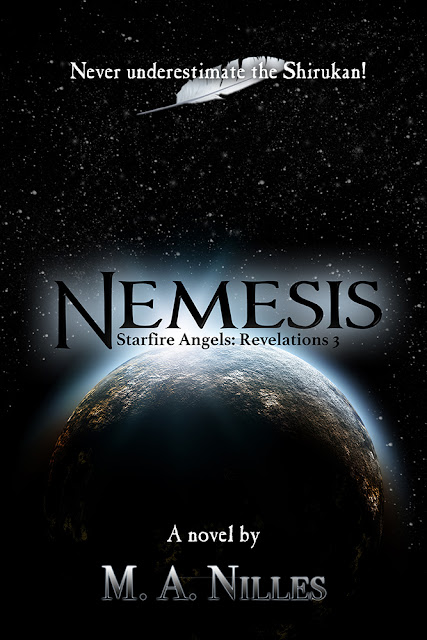 It's a compromise between strict"science fiction" and what Starfire Angels has been, setting the tone of this story as it is, which is not a romance. That feather seems to hint that there's something more, giving it just the right touch, imho.

Now I need to get back to finishing Nemesis! I left off about halfway into the story. On a good note, the time away was just what I needed. I left off where I was muddled and this time away gave my mind the breathing space to resolve the issue that had stymied me. I now have a concise plan for the rest of the book which wraps it up quite nicely.

I hope to finish the first draft this summer and set it aside to return to Enlightenment, hopefully by end of summer/early fall, if I can get the writing up to speed again. With a clear vision of the rest, it should be easy, but it's always easy in theory :b EDIT: I've set up the preorder on Smashwords with a release date for February 4, 2016. I am committed to finishing this!

And speaking of preorders, on a final note, The Lereni Trade is now set up as a preorder on Smashwords. It will distribute to BN, Apple, and Kobo over the next couple of weeks. I'll post links when I have them.
Posted by manilles at 9:26 PM No comments:

Help! I can't decide which one I like best, so I'm looking for outside opinions. 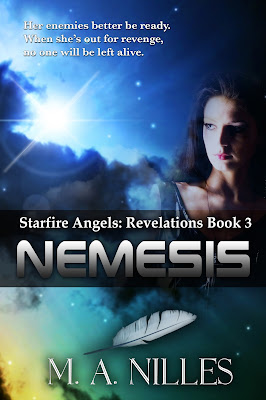 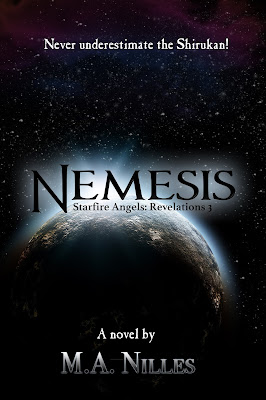 I've done various iterations of each. This story in the Starfire Angels series is not a romance. It features Leksel and Valdas being forced to work together to save their lives, their beliefs (which clash), the Starfire, and the universe. It is action, drama, and an act of revenge on the part of Valdas for what has happened to her (read Phantoms for more on that).

Which cover version would most likely make you want to read the book, besides waiting on the next part of the series, if you're a fan?

Also, would you make any tweaks (besides the top blurbs, which I may change before the cover is finalized)?
Posted by manilles at 9:49 PM 2 comments:

Posted by manilles at 5:45 PM No comments: 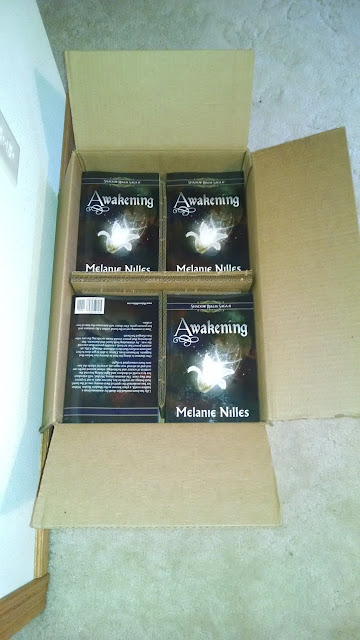 Twenty copies of Awakening are up for giveaway on Goodreads. (Click this link: https://www.goodreads.com/giveaway/show/140838-awakening) Less than 4 1/2 days to go! You can still enter. All will be signed, sealed, and shipped next week (after winners are selected).

Some will go to beta readers. And others will be used for promotional purposes or direct purchase (contact me using the form).

The full version will be available for purchase June 28, 2015. Another book is born!

Thanks for reading!
Posted by manilles at 2:22 PM No comments:

And now for a word from my attention whore cat...Dargo 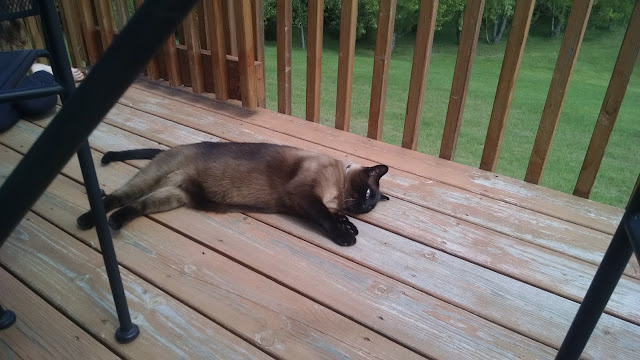 Dargo enjoys his little outings on the deck, but that's as far as we let him go--too precious to us to let him wander outside to get lost, killed, or sick--and he rolls and rolls as if to mark it with his scent in his own cat way of saying, "This is mine!"
Posted by manilles at 9:07 PM No comments:

Email ThisBlogThis!Share to TwitterShare to FacebookShare to Pinterest
Labels: cats, just for fun

Awakening is coming out this month! (Like you didn't know...Sorry for the inundation with news over the last couple of months.) I won't say any more than that.

When is Nemesis coming out?

The second is the question I've answered most over the last year. I've been busy in the last year with other projects and real life. If you haven't followed it all, I released Spirit Blade last fall then went into what is now Awakening, putting off any new Starfire Angels after working on the series for five years. I finished Awakening in February and started editing to have a big health crash a month later, which took a lot of trial and error and digging and medical tests to finally get down to a likely cause and back to feeling like myself. Once I was able, I finalized all the details on Awakening and went into promotion mode, which is where I am still.

However, regaining my momentum in writing after a prolonged period of editing or nothing at all (didn't have any focus/interest in writing while I was at my worst) can take a while for me. I am still recovering from my health predicament and healing my digestive system. But with that has come greater creativity and focus, so I foresee some exciting things happening.

I believe you'll enjoy the first story set in this series, The Lereni Trade, a novella of interspecies romance with some ties to the Inari (angels) of the Starfire Angels series. These stories will be stand-alones and will only loosely tie into the main series; I don't plan on numbering them, unless I decide to write several stories tied together. Right now, however, I have two series to work on (Demon Age and Shadow Realm Saga) and just want to have something different and fun with no obligations other than the occasional random story I feel like telling. BSA will afford me that opportunity while expanding on a world already established, which can be both easier and harder.

I will get around to finishing Nemesis, but after my ordeal with my health, I have realized that I need to just enjoy what I have while I have it. That includes writing. I can't force a story. Please have patience. I will get to Nemesis when the time is right, and then the story will be well worth the wait. What I have already will make it all the more appetizing; I guarantee it (but my muse led me astray for a while).

Until then, you can sample Awakening in its four parts or wait for the preorder, and in the fall, you can enjoy seeing what else is possible with Starfire Angels in The Lereni Trade.

Enter at Goodreads to win a signed copy of Awakening, the first of a new romantic fantasy series:

See the giveaway details
at Goodreads.

Posted by manilles at 1:56 PM No comments: