In the last 24 hours, I finally figured out the opening of Book 14 of Starfire Angels: Forgotten Worlds. This does not get easier with time. In fact, I think it gets harder.

Some books seem to write themselves, but most books have their difficulties. Starting these books on the right scene is always one of those. Book 4 had a segment of a later scene in the opening, and Book 6 was all out of kilter while Nya was drugged. Book 9 had something similar with the story being told out of order. Those out of order books are interesting but fun to write and seem to write themselves in a way like that.

The normal linear timeline books can be more difficult. I don't know why. Perhaps because the story is... normal order and I want them to start out exciting.

However, Book 14 will feature the wedding. That's right. Ann and Nik and their friends are returning to Ethal. If you haven't figured out what the mirror in the trials was about, you'll learn that here. (It's something I wanted to reveal a while back, but it never quite fit to explain it sooner. So, my thoughtful readers, sometime in the next fall/winter season, you'll get to see if you were right.) You'll also have the pleasure of the culmination of a couple of subplots that have been carefully woven into the story.

The characters are evolving, although you haven't been privy to what happens in Books 12 and 13 yet, so you'll have to take my word for it.

When I started this series, a had a bit of a different concept in mind, but that's always evolving and changing, which is what makes the series interesting, at least for me. It also can make it progressively harder to write, because allowing character growth and change while staying as true to them as possible can get messy and complicated. And don't even get me started on keeping all the details straight! Oy!

But I love this series and have it planned out to an exciting finale. Part of the path to that is this book.

So, on we go into a new adventure with Nya and her friends!

Posted by manilles at 5:47 PM No comments:

Voices in the Dark is done! It is publishing now across ebook retail sites. Be sure to check out https://melanienilles.com/books/voices-in-the-dark/ for links to be updated as it shows up in various stores. 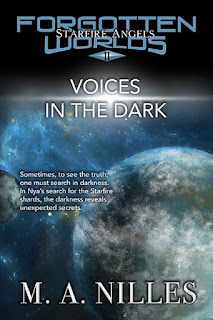 Escaping the Paxons caused damage to the Cartegos that requires more extensive repairs than Vel and Shen can perform in space. To access the damage, they need to set down in an atmosphere. To reach a planet with an atmosphere, they need Nya to open a portal, and the Starfire entities have the perfect location.
While the ship undergoes repairs, L'Ni accompanies Nya on a journey into a cave on Karam Three to find the shard left there. However, the wildlife is protective of their world and attack ferociously to defend their territory, driving Nya and L'Ni deeper into the abyss of the cave.
The situation is no better for their friends. While Nya and L'Ni are trapped within the darkness, their friends must make a difficult decision.
Not all is what it seems on Karam Three.

Posted by manilles at 8:07 PM No comments: