I haven't had much to say lately and have been quite busy with life and writing. It's great to write like that again.

But this only came about because I finally received treatment for at least part of what I've been suffering. It's taught me that it doesn't matter what your numbers are but what you feel. Don't listen to conventional doctors who say you're fine and anything you think you're feeling is wrong is "just anxiety" or "just old age." Find a new doctor. I did and I found some relief, not only because of the treatment but also because they listened and that alone is powerful medicine. Those doctors tried many things and tested to try to find the root cause but ultimately, we had to resort to the most common treatment, which is sufficient for me but at much lower dose than normal. And I have to watch my diet or risk a flare of the other part of my issues.

I wanted to make a point for anyone who feels sick but isn't feeling better. Look beyond traditional/conventional/corporate medicine. Listen to your body, not medicine.

Because I've finally found a treatment that works, I've had incredible creativity (except on flare days) and have made fast progress on Enlightenment. It is currently at 92,000 words and growing to where it will likely end up with a final word count between 110K-120K. But that's just the first draft. I tend to over-write and then have lots of space to cut back.

Lilly is learning to use a new power and there's a new daemon, a scout sent to learn what it is she can do. Nothing is what it seems and Lilly is having visions of a time before the Sundering. Her visions will reveal secrets that could change the course of the war.

This summer I have also been feeling more like riding Buddy and he's doing magnificent. He has been learning lateral work and has become pretty adept at walking leg-yield and the beginning of straightening. Although he still wants to go to his herd, he is learning to cooperate better. Since he has to work, he appreciates straightness more and more. He's at a point of learning trot leg-yield in preparation to canter. The dressage work is making things easier on him as he learns to carry himself properly and lift his back. He is becoming fun to ride, especially since he feels like he's enjoying the training.

After we finish working, we often head outside the arena for a little trail ride. To make those rides calm and pleasant, on days that I don't ride, I try to take him down the ditch for a trail leading session. By leading, I stay safe from him freaking out over something new. And by getting him out away from his herd, he learns that he can go out alone and trust me as his leader. If we're going to really trail ride, he needs to learn to deal with new situations and sights without letting his fear overcome my training. At least I can stay safe introducing new things to him because I am often alone in these situations and am getting older. The ground gets a LOT harder when you get older. I don't need any accidents, even if I always have my cell phone strapped to my leg when I'm with my horse.


And because he was too cute to leave out, the latest barn addition, who just appeared without any explanation. I don't know if he was thrown from a car nearby or fell out from hiding under a hood or if his own mother left him there. I know that he'll have a good home and that the dog is smitten with him, just as the rest of us are. 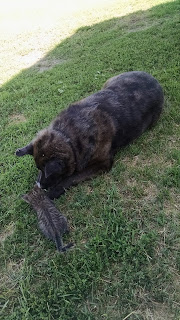 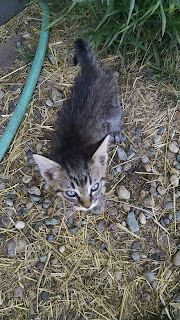 Posted by manilles at 9:11 PM No comments:

the view from the saddle

The world looks different from the back of a horse. It's more peaceful and connected. One doesn't think about their problems or, if they do, those problems are minor compared to the beauty in that moment.

A horse doesn't plan ahead but lives in the moment. Really, they are incapable of that wider scope of cognitive function. Rather, they base their immediate reaction on experiences of the past based on the situation that they are in at that moment. They don't think that the sign in the road might blow in a sudden gust, but if it does, it becomes a monster at that time. You can pass the same sign a hundred times but suddenly on one-hundred-one, it's a fire-breathing, horse-eating monster. Horses live in the now, this moment. We can learn something from that. 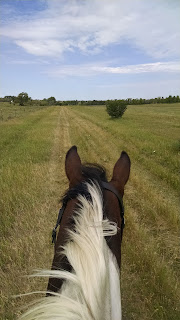 I think some of that somehow affects us when we are with our horses, connected. When I'm with my Buddy, I am in that moment. I don't think about projects at work or what so-and-so might be scheming (somewhere) or my writing and what plot point I need to conquer. Rather, it's just me and my horse conquering the world together. That's it. Nothing else.

Of course, that doesn't mean I'm not thinking about how to get him to cooperate in a task. I still think about what I'm doing, but he has my undivided attention and when it comes to riding, it is all about that moment, each moment. It's very liberating.

This morning was a beautiful morning all about preparing Buddy to head out on the trails. After lunging and some arena riding, he was pretty subdued and focused. I've been taking it one step at a time in an effort to give him the most positive experiences possible. We've slowly graduated from one small step to the next: round penning and desensitizing -> lunging -> riding in an arena -> lunging and riding in the pasture and leading down the road outside the fences -> riding outside the fences.

We rode outside any fences this morning for the first time. My goal was to just ride along the property that he is familiar with, getting him used to being ridden somewhere outside an arena. I don't want to push him too far too fast. I never have. And he's rewarded me greatly every chance I've had to work with him. This morning, we did have an issue along the trailer row, but we would reach his limit of fear and I let him retreat to where he was comfortable and calm again, then we rode back and I'd ask for a little further before retreating. He wanted to run away, but he has the personality of a superb trail prospect. He listened to my voice and seat (which I try to keep relaxed) and the bit pressure (which wasn't that much). We did that three times and by the last time, reached the end of the trailer row and headed back to the arena far more calmly and with little rein pressure. That was good enough progress for me!

Buddy is not a flighty horse but he could be if we hadn't prepared for this. I've spent almost two years building his trust and confidence in my leadership. And I've done all I can to let him make the right choice so that I don't have to discipline. He's challenged me a few times, but it's never been too difficult to make him realize that misbehaving isn't worth the effort--he's a bit lazy, thank goodness. It's that laid-back personality, partially natural and partially from training, and achieving first his trust in my leadership on the ground and then his trust in my leadership on his back that combined to bring out the best in this little guy. It's not about the human being the boss but, rather, a trusted leader and partner.

And I did measure him recently with a proper measuring stick. He may not stay a pony for long at already 14.2 hands at 4 years old. Unfortunately, he looks like he will end up being a small horse, which tend to not score so well in shows against larger horses. He won't qualify for the pony divisions against other small equines. But, I have a happy little horse who will eventually carry me anywhere and do anything.
Posted by manilles at 2:38 PM No comments: