I'm so excited by this. I said I was going to wait and I at least waited until reaching the halfway point of writing the second book. I love unveiling the covers of books to come, and this was hard to come by.

I searched through premade covers to find one similar to what I had in mind and was pleasantly surprised by what is the Enlightenment cover below. It happened to work out that the designer had more images with the same model that could be made into covers for the other two books. Hooray for consistency!

The challenge with this is that on the fictional world of Ahlias, the races have pretty well blended together so that most citizens have mixed characteristics, although the extremes of skin color do happen. The main character is one of the darker complexioned individuals of the world. Finding a cover with a model with the right attitude, age, and color was a challenge, but I knew the right one when I saw it. I lucked out.

As many know, book covers do tend to be whitewashed. That's such a shame, because, as Guardians of the Galaxy demonstrated with pink, blue, green, yellow, and even crystalline beings and more, we can use whatever color pallet that we choose. Finding a model to represent that can be hard, unless one is willing to hire an artist that can create something from scratch or is willing to rewrite their character, which just isn't an option in my mind.

The Luriel Cycle needed a style more in line with contemporary/urban fantasy, which is to use live models. Besides, I wanted a real person for these. She worked out nicely. Thank you, whoever you are who posed for the stock photos used in these covers. We writers appreciate your willingness to share yourself with the world to represent our fictional characters!

Now, I would like to reveal The Luriel Cycle covers:

And thank you to Angela of Covered Creatively for the artistic talent and cooperation in setting up the series covers to fit the stories written and planned!
Posted by manilles at 1:00 PM No comments:

Ever since I had a health crisis occur about two years ago, I went gluten free. That single dietary choice made a difference to my life.

Since then, I've learned to eat mostly without grains in my diet, but besides the occasional popcorn or rice pudding, I've also learned to bake with alternatives to wheat flour that are just as tasty, if not tastier. My favorites are sorghum and almond, usually mixed, and sometimes a little rice flour.

One of the recipes that I've adapted was the one that I used to make sweet breads and muffins that I think surpasses the traditional wheat flour recipe in taste. I've been asked for the recipe by friends who have enjoyed them enough to ask for the recipe, so here is my gluten/dairy/soy free base plus additions for bananas and chocolate chips (YUM!): 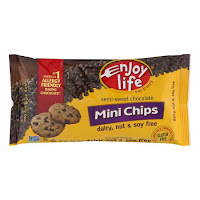 
Instructions:
1) Preheat oven to 350 F.
2) Beat eggs.
3) Add vanilla and beat into eggs.
4) Wisk oil into egg mixture.
5) Use the same measuring cup from the oil to measure the honey. Doing so means less honey sticks to the measuring cup and gets into the batter without much fuss. If the honey is crystallized, you will need to set the jar in a bowl of hot water for some time to liquify it again.
6) Mix the honey thoroughly into the liquid ingredients.
7) Add the water.
8) Add the sea salt and mix thoroughly to dissolve it.
9) Mix in remaining dry ingredients.
10) Mash bananas in a separate bowl until mostly smooth with a few small bits, then mix them into the batter.
11) Add the chocolate chips.
12) Fill muffin cups/bread pan and bake. I use silicon bakeware, which requires longer cooking times. Generally, the batter is thick, so feel free to mostly fill whatever you use. The muffins or bread will be done when they are browned on top and spring back from light pressure.
Posted by manilles at 12:57 PM No comments:

Updates on life, writing, and training my horse

Life is moving on for me, finally. While I still have to deal with Hashimoto's disease (not hypothyroid, thank goodness...at least not at this stage), I am doing better with the air hunger and insomnia that plagued me for a year and a half. I have learned that I can't take 99% of supplements. Apparently, I get enough in my diet that anything else is too much, according to my body. That's fine with me--eating healthy is the best way to go. And we're still working on figuring out the cause of the eosinophilia that's shown up on over this same time period--I can't help wondering if that's related to the symptoms in some way.

Weatherwise, spring is here and it seems to be full-on heading right into summer. This past week was hot. Time to get our garden going, but first we need to haul in some manure, because what we have is very thin topsoil and mostly sandy clay. We discovered last year that horse manure goes a long ways to fertilizing the soil. And we doubled the size of our garden, so we need the manure on the new section. The old section is good to go, and hubby tilled it up. We even have strawberries already blossoming (returned from last year), which were carefully tilled around.

Warm weather means insects are out too, so be careful of ticks and mosquitos. With WNV and Lyme now spread throughout North America, we should all be careful. It's about time that Lyme get the recognition that it deserves as a terrible disease.

And this also means I'm out with my horse more. Buddy has blossomed this spring. As I mentioned in the last post, we picked up from the start this year right where we'd left off last year. We've really progressed already this spring. Although I only visit him 2-3 times a week and only work him 1-2 times a week, he's super smart. A few weeks ago, I started asking for frequent walk-trot transitions on the lungeline, and since then, he has really started to carry himself like a champ. His back is starting to swing as he comes through with lift and freedom. And he's straighter, which gives him greater balance. This has carried through under saddle, where he's now trotting for me. He's such a sweetheart in a cute little package (large pony). He's also become intensely focused in his work to where he is tuning out things that used to worry him and seems to enjoy feeling more balanced to where he wants to stay that way, which tells me that dressage is right for him.

Last of all, I want to announce that I will be revealing some book covers this summer. What was once planned to be a 4-book series called the Shadow Realm Saga with the release of Awakening about two years ago (removed from sale several months later for other considerations), will now be a 3-book The Luriel Cycle. The new ebook covers are all designed and ready, but I'm not yet ready to reveal those. They are eye-catching and better than the generic covers that they had previously. Now, I'm waiting until I am further along in the first draft of Enlightenment before revealing these new covers.

I hope to re-release Awakening with its new cover in the fall (after the first draft of Enlightenment is finished). And, as with all things artistic, it will have a little more editing, because art is never really finished and can always be a little better. Right? The titles of the trilogy will be Awakening (book 1), Enlightenment (book 2), and Eternal (book 3). These are my projects to complete over the next year, before I start anything new.
Posted by manilles at 11:08 AM No comments: