It's been a warm winter so far here. Although I would prefer snow, I'll take advantage of what God gives us.

In this case, I've had more opportunities to play with my horse, including riding. I wish I had a picture of it, but maybe another time, I'll get that. We cantered today without Buddy getting upset like he did on our previous attempts. (Long story short--he was cowboy broke when I bought him two years ago, which meant pushed fast and not allowed to learn at his pace. I've been retraining him to be relaxed and willing rather than scared into doing what I want.)

Today, I also had a coach at the fence who got me back into canter. I can't thank her enough. It's been four years since I rode a canter and I was apprehensive, especially since I still consider Buddy in the learning stage and not yet seasoned. The coaching was needed to push me out of my comfort zone, and I knew if something did happen that someone would be there.

Buddy will be five next year, and my goal is to have him comfortable enough under saddle to introduce the big spooky bovines. In other words, I want to start working him on cows. He has the conformation and the moves to make the cows move. The dressage training is just the start of turning him into an everything horse like I had growing up, but even better than them.

After our session giving both of us new confidence, Buddy decided my hood from the vest under my jacket was a fun chew toy. 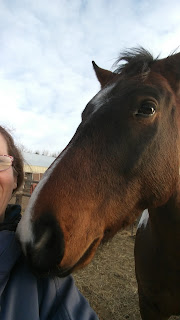 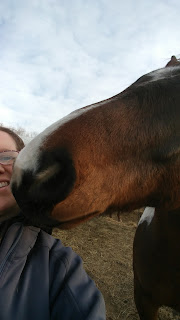 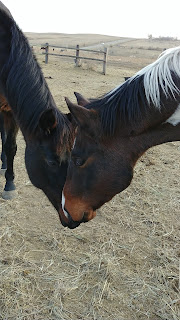 Buddy and his friend, Ian
(pasturemate, owned by the person who coached us today) 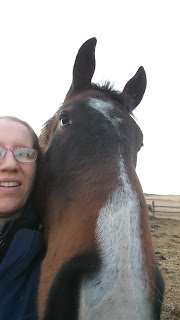 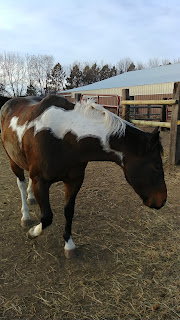 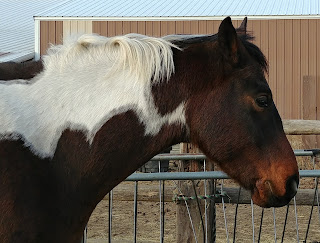