Today was a gorgeous day that I couldn't let go to waste. It was a cool mid-70's, almost 80. But there was that cool breeze. We're expecting a winter storm starting tomorrow night through Saturday. It was like a summer day, and being the last nice day that we'll probably see this year, I had to see my Buddy boy.

He's been a real pill lately when being ridden. Ever since he and Jewel became BEFFs (best equine friends forever), I almost can't ride him. He goes nuts about being away from her. After the last time I rode, I decided I'd had enough of this behavior and would let the little ass accompany us. (I write ass, because it is a legitimate term when referring to a donkey, although the double entendre is intended also.)

It turns out she isn't as annoying as I had thought, and I was right that it did keep Buddy calm, except that he fussed with a threat to buck when I asked him to canter. I just have to get comfortable in the gait on him; but his behavior isn't helping us get past that, and so my anticipation of trouble just makes it more likely. It's a vicious training circle that I'm trying to break. At least I had a good ride. It looks like I need to let her come along from now on, if I hope to get any actual training in, instead of a rodeo.

Jewel actually wandered back and forth from me to Buddy to patches of grass or just checking things out in the barn. She was like a foal around its mother being handled by humans. Except I think she also wanted me to take the burrs out of her coat. She kept coming to me and standing for that, unless they were in pretty deep. I had to get a scissors for those. I think she appreciated getting those off.

I took some pictures today because a friend asked for them. I figured I might as well share them here. In a couple days, I'll probably be sharing snow pics. I'm surprised how well some of these turned out, since Jewel kept coming right up to me and the sun made it hard to see my phone. 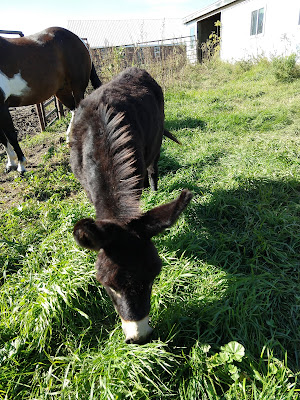 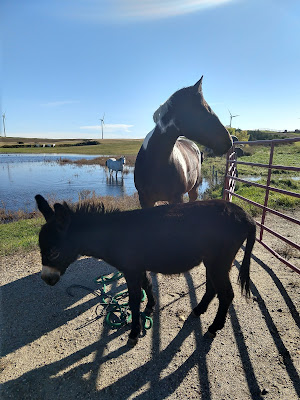 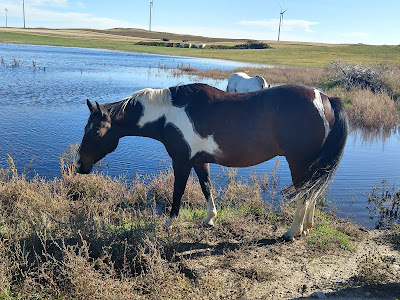 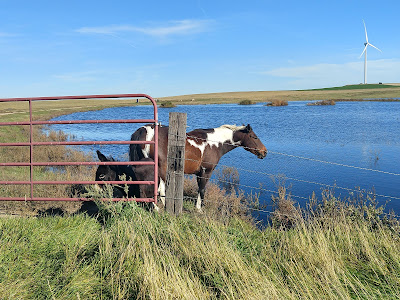 ps--I'm told that she bites, but she hasn't tried to bite me yet. I wonder if it's because she knows I come for Buddy and they are friends, so I'm a "friend" or if it's because I've given her a treat a couple of times when I've gone out to catch Buddy.

pps--After I was back up at the barn and left them at the gate in the last pic, I turned around and saw Buddy and Jewel chasing each other, playing.
Posted by manilles at 10:22 PM