It's almost done, and I can announce the title. Starfire Angels: Forgotten Worlds #6 will be called DISPOSITION OF DREAMS.

I'm still working on the cover.

This book in the series started out great. I thought I would have finished two weeks ago at the pace I was going. Then... the engine sputtered and stalled. I had sleep and concentration issues and the story was in a transitory place as it was. (Strange how things work that way.) I struggled, but that was good in some ways, as it made me think more deeply about what was happening in the story.

This "episode" was a different challenge, because there is actually a confusion of dreams and reality. It was easier than expected to write that part of the story, which gave me a break from the story reality. The hard part was getting back into the story reality after detouring and putting the next set of characters in a situation that achieved the goals I had for them.

Now, I just have to write the last chapter of the book, the teaser for continuing to the next book.

I hope you're enjoying the first three, because #4 comes out next month, in EXACTLY one month--December 19th! 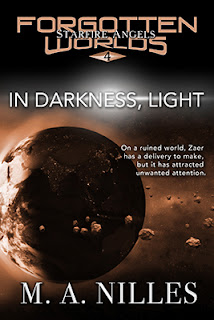 Pre-order today from your favorite retailer