The Destruction of Walls... ready to go! 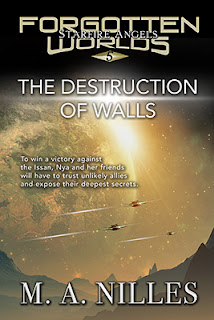 After more than I expected for the final round of edits on THE DESTRUCTION OF WALLS, it's finally done. So much better! I had a super clear head with this round and was coming up with new ideas on the spot to tweak the story with clearer directions for some of the characters.

I had been dealing with some mild depression since about the middle of last summer that would come and go with fuzzy headedness and finally found the right supplements to fix some of that. I hate anti-depressants because they just make it harder for me to think, which just makes me more depressed and kills my creativity; they don't actually fix the underlying problem but just mask it. I found the underlying issues and treated those with what I know and am doing much better than I would with any SSRI out there.

Anyway, it's allowed me to think more clearly, sleep more soundly, and write with more ideas, or at least edit... since I figured this all out while editing TDOW. I feel almost like my old self, if only I'd avoid the occasional treat. Sugar and caffeine are not my friends, as much as I'd like them to be :(

But, that's just a warning to others out there. Every situation is different; I've had to spend the last five
years figuring out what supplements helps me in what way, but I can say that for sleep, B6 and NAC (N-Acetyl-Cysteine) at night are the best sleep meds ever... at least for me. And--wow!--does refreshing sleep ever make a difference!

I've come up with better ideas for tweaking the series and made notes for the upcoming books I've planned. I'm a quarter done with the writing stage, which means I have a lot left to write, but it's so much fun. I hope readers enjoy reading it as much as I like writing it. (I've said it before but will say it again, because I'm really excited about it right now.)

So, I just finished final edits on TDOW and have uploaded it. You'll soon have the opportunity to read a sample. This was one exciting story with lots of intrigue and action and revelations. I love figuring out how stuff works, so I also included some technical details. The characters all shine in this at their best. They really came together as a coherent team, at last.

Once I've finished writing the first draft of Starfire Angels: Forgotten Worlds Book 7, I'll list the pre-order for Book 6, Disposition of Dreams. And then I should also have a title for #7 and a cover.

Stay tuned for updates!
Posted by manilles at 2:59 PM