While the kids are starting school across the country and getting ready to start in our local school district, the weather is changing. The dog days of summer ended over the last couple of days. Autumn is coming on time, just in time. We finally had rain this past week to make up for six week of drought--everything did come went around us. We live in a town that is a vortex of rain going around. It's just odd... until the wet season comes; then nothing stops it. The inch of rain that we had over the course of a couple different storms this past week soaked right in--the ground is still mostly dry despite the rain. It's needed that badly. It will be nice to see our lawn green up just in time for winter. This is the opposite of last year, which was far too wet.

The daily highs are cooling down from 90's to 70's too. Normally when this happens, the animals get a little friskier. However, Buddy seems to have settled down. I haven't ridden for four weeks, but today was a good ride. We're combining dressage work and reining work now to get him thinking more in tune of balance but also rollbacks to turn a cow. He seemed a little edgy with the cooler day and wind but actually handled himself quite well. We had a good ride without him freaking out from the kids cleaning barn or playing and the small flatbed in the middle of the grassy area where we work.

When we took a little ride around the feedlots, things were a little different. Still, he's come a long ways from a year ago. Getting past the quonset to head to the feedlots was a little challenge, but he didn't freak out like he used to. And going around the feedlots wasn't much of a concern. He never called for his friends the whole time I had him away from his herd. It helped to have the donkey with us, but even when his herd was calling for them, he didn't reply. That's a HUGE improvement in his behavior that has come on this year.

Afterwards, I rewarded him with a little extra feed, which the donkey kept trying to steel. She's figured out how to tip his bucket, even when it's not quite in easy reach. 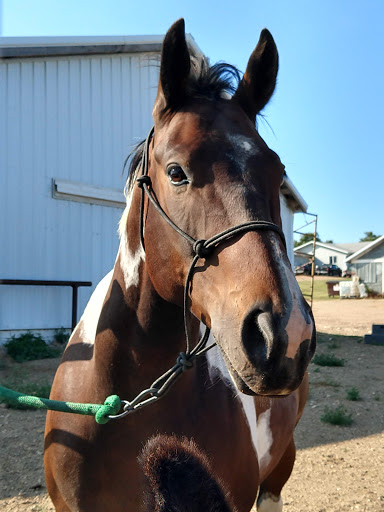 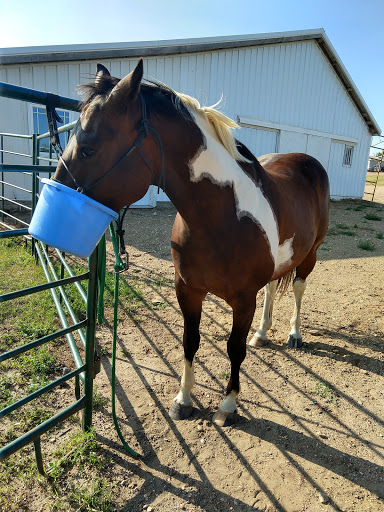 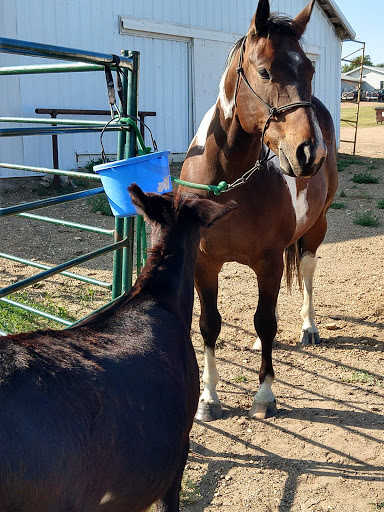 Jewel follows us all over, even right back to the pasture. She's a little attention whore.

When I turn Buddy back to his herd, I always give him a little rub down. You'd never know he was head-shy when I bought him five years ago. He LOVES having his ears, eyes, and poll rubbed and will yawn, blow/snort, and shake his head with a big sigh of pleasure. If I don't give him that little reward, he gives me a look that I swear is meant to shame me for forgetting. Spoiled but worth it. He'll be starting to get fuzzy soon enough.

Our cats are spoiled too. They're a little more active on cooler days. On hot days, they'd just plop on the deck like they'd melted. On cool days, they're more attentive and watching the activity in the yard. Jack jumped over the gate to get to the stairs and go down today. We caught him in time, but it was startling. He doesn't usually do that. We put him inside, where he cried and cried to go out then. He must have seen something he wanted to check out. Dargo, however, just likes to lay outside in the fresh air and doesn't cause problems. Suki sometimes jumps up on the rail.

It was an interesting day with our animals.