It's done! The wait is over! FERIOUS has been uploaded and is disseminating to retailers as you read this. What a furious pace in editing! This one was a killer for me to edit--so many complications in this one. However, after initially thinking I was done yesterday and accidentally posting this announcement before I was ready, I can now announce that Book 9 of the Starfire Angels: Forgotten World series is definitely ready for your reading enjoyment. (Now, I'm on to writing book 12.) 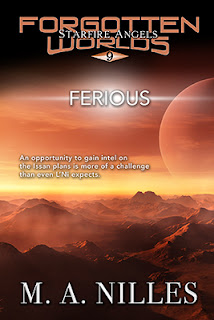 Nya has discovered a new secret about the Issan plans, and L'Ni isn't about to let the opportunity for key intel slip away from them. Meeting a contact with the information they need to fight the Issan is risky, but it's a risk that everyone on the Cartegos is willing to take.
The mission leads them to a desolate world that is host to an exchange outpost serving the Issan. Getting in is easy, but finding the Dirnothril contact and getting out with the information attracts trouble. The Duras outpost is a dangerous place, and L'Ni isn't about to leave anyone behind.
----------------
And as a teaser, here are some of the events coming a few books in the future of the series (without giving anything away):
* L'Ni's background will be revealed in Book 13.
* Nya will return to her homeworld at some point. I don't know about you, but I really want Leksel and L'Ni to meet! (I have no idea how I gave them both "L" names, honestly. It's pure coincidence.)
* I had an excellent idea for a setting that does not fit in with the usual places of this series. That's going to be a fun change.
I could say so much more, but these are just a few of the exciting things I have planned at this time. I can't tell you much else right now without revealing key points or giving away details that readers will need to figure out for themselves. Or there are plots that I'm not sure of yet, so I don't want to say anything. I would like to do more with certain characters but am not sure how those stories would develop, so I can't really say anything about that either.
FERIOUS is only book 9. I have finished the first draft of book 11 and am now going into writing book 12, which is about halfway through the series, although it could go longer. I keep getting plot ideas for new stories within the framework of my series plot, side stories and main action stories.  You'll have to trust that I have a lot of excitement planned yet for Nya and her friends.
Book 10: DRAGON AND FURY, will be available in the fall.
Posted by manilles at 6:25 PM