the story of Buddy

Okay, I'm not totally obsessed with my horse, but horses are a big part of me. I've said before that horses are a part of my soul. Not having a horse partner is like death and I can only have one at a time. I mean that. Buddy has saved my life.

When my last and dearest horse I had ever had in my life went downhill in his health, I made the difficult choice to put him down. I had never done that before, but it was clear that he was in increasing pain and nothing I did helped him. I took him to a good place where he was put to rest and I can visit him any time. But he has visited me.

I sincerely believe that Beau was looking over my shoulder a year later when I went to the sale barn thinking I'd take on a pony that I could share with my kids and handle with my new health difficulties. I knew my skills could match whatever I found.

At an auction, one never knows what they'll find, but there are hidden gems. Buddy was one of them. He had ringworm, bad teeth, and had been cowboy broke into submission. However, he'd been broke fast to look good in the sales ring. Luckily and unluckily, he'd only been 2, not 3 as he was listed, so I knew that I could undo any training mistakes since he hadn't had long enough for bad handling to cement any bad behaviors.

I knew to be wary and I had my strategy for the couple of ponies I thought would fit the bill, one being that I took one of my kids with me. I know the games that horse traders play and especially those who work that particular semi-annual sale. I lost on a smaller pony but I won Buddy for what I consider a fair price--ponies are always in high demand and high priced. But I do love the thrill of bidding at an auction.

Buddy came with baggage, some of which I quickly dropped. He learned that he didn't have to just take whatever I did. He learned to open up to me, through massage and natural horsemanship and by clearing up the ringworm on his face and getting his teeth floated (the equine dentist discovered sores in his mouth in that first visit just a few weeks after I bought him). He was given a winter to grow up and get used to his new home and herd. It was too cold outside and I was going through a terrible time with my health to get out to see him more than a few times until spring came. Our first spring (2016), he had bloomed! 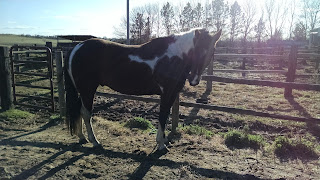 Last summer, Buddy took to natural horsemanship immediately, and then had to learn to accept side reins and the bit. He had some baggage yet to work through, but he had awakened to a new world and an easier life. He was able to grow up. I didn't ride him more than 15-16 times all year, but he was only three years old. Mostly, I focused on ground work, his feet, and becoming a human he could trust. I had already used our first six weeks before the winter set in since buying him to establish trust and confidence in me, but that went even further when we started working together last year. And I started him in a much gentler bit than the one he wore in the sales arena.

We ended 2016 as a team. Buddy had the advantage of everything that my over 30 years of horse training and then trying to care for Beau's worsening symptoms taught me. He had an owner who could help him physically and mentally to overcome what might have happened to make him contain his emotions. He learned that, while his human had rules, he could express himself because that human would listen; and he came out of his shell to become very expressive and cooperative with training that takes the form of questions and being directed toward the correct answer rather than punishing him for not understanding. As an example, he went from not letting me handle his feet when I first bought him to giving me his feet a year later--they need regular treatment to avoid infection that causes heel pain. He now understands this and lets out a big sigh after all four feet get their triple antibiotic ointment/clotrimazole mixture. (Tip: most foot pain in a horse can be attributed to one or (most likely) a combination of 1) contracted heels, 2) poor trimming, 3) infection, 4) sugar-rich diet...not navicular disease.)

We started 2017 as partners. Once again, I gave him winter off--MUCH too cold and snowy to be out for more than a quick check. As the previous year, we started with ground work. Buddy is such a smart little guy that he picked up right where we had left off last fall as if he hadn't had 3 months with hardly any handling. This time, I started with being sure he would yield his head by reaching his nose fully around both sides to his ribs, but I also asked that he relax before I let him go, combining a natural horsemanship technique with body work. This actually worked out to help him even more than I expected.

It wasn't long this spring before I got on for the first time, which happened a few weeks ago. Today we had our second ride (spring decided it wasn't ready to come back and I had busy days in there when I couldn't do much with him). Buddy finally let me ride a posting trot circle on him. We tried once last year but he wasn't sure about my posting and didn't want to trot. He started that way today and then decided to go with it.

Before our ride today, I lunged him with side reins. Last week, when I last lunged him, I started asking for frequent walk-trot transitions to keep his attention on me rather than the herd. He started sitting and reaching more forward at the trot and developed better balance. Today, I asked for that from the start and saw the transformation. He is quick to learn and when guided the right direction, the training seems effortless, like he already knows what to do.

I have felt from the beginning that Buddy came into my life for a reason. It could have been any horse, and I might have done far worse with a horse from the auction, but Buddy is the calm, easy-going horse that I need in my life right now. Although he's not a fancy mover, he is easy to care for and work with. I dearly miss Beau's giant strides (when he was at his best, before his deterioration) and the uphill canter (that he would no longer perform in the end because he was in too much pain). However, my life changed and Buddy is the right size (pony sized) and temperament for me now. And Beau's expensive dressage saddle fits him--that almost never happens.

I cared for Beau when his health deteriorated and did everything I could to try to make him feel better. I failed. Now, Buddy is taking care of me. Since I've had him, I've gone through some of the worst issues in my life and had contemplated suicide when things were at their worst. It was knowing that Buddy was there for me, needing me, and that I might be able to return to the joy I once knew by sharing my soul with a special horse that gave me the courage to keep trying to recover. Had I not had a horse, my soul would have been empty and had no reason to continue the struggle through the despair of my health problems. I feel that the day I found Buddy, I had a four-legged angel looking over me making sure that I was taken care of and giving me a purpose.

I have a dream for Buddy--National Pony Dressage Finals. Someday. He'll be able to do it when we're both ready.

All that I've been through has taught me not to push and has given me a patience that I never had before in my life. I feel like I've arrived at that special place that all the old horsemen find. I know now what horse whispering really is--taking the time, having the patience to listen. It's knowing how to ask for cooperation by showing the horse that what you want is easy; It is making the horse feel secure and confident. All that I've suffered has been a blessing in disguise, another lesson that I'm sure came down from a four-legged angel. Thanks, Beau, my original buddy!
Posted by manilles at 9:18 PM