We have a drought here, so we're praying for rain. And it's been HOT!

Because of the heat, I've been going out to see Buddy in the mornings when I can. It worked out well today. I went out to work with Buddy. The outdoor arena was being worked up, so we lunged outside to get that done while waiting for the arena to be clear. Once that was possible, I rode. He gave me a few young horse moments, but nothing terrible. He's generally very cooperative, but he's still young enough--and damned smart enough!--that he could get spoiled very quickly with the wrong rider. It didn't take much to correct him and then he fully cooperated. He just had to try.

After our ride, I gave him a spring bath, something I've been wanting to do for a while. He gets so disgustingly dirty crossing through the creek in the pasture.

I also did something I've been dying to do--brushed out his tail. I don't do that unless it's cleaned and conditioned, which I did today. You pull out fewer hairs by leaving the tail alone, so it stays thicker and longer--I ended up having to trim it, because it gets so long. Other horses at the barn have thin, short tails because the owners brush them out all the time without washing and conditioning first. I had to shorten his with a scissors, like I did last year--it helps keep it from getting muddy, which gets flicked all over when he's swishing flies, and it helps keep it from picking up cockleburs.

Anyway, he cleaned up to have bright stockings, so I took a few picks of a clean horse, who probably got dirty crossing the creek soon after I left around noon. With the drought coming on, the herd has been crossing the creek to get the grass on the other side, but it's getting crispy there too. We're all praying for rain. 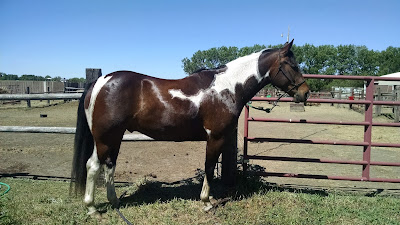 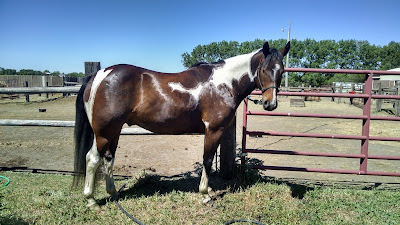 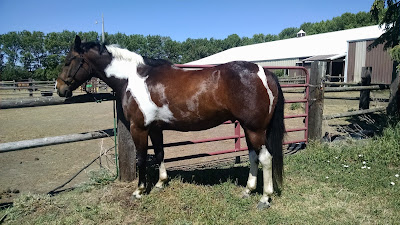 He cleans up nicely! (You should have seen how muddy he was from fresh creek mud!) And look at how long that tail was. It's still long, but not so close to the ground.