After a brief morning snowfall, the sun came out. Although the morning temperature and breeze were higher, the afternoon turned sunny and calm. It's the wind that gets you!

I hadn't seen my Buddy in two weeks and was overdue for a horse fix. I also missed visiting with my family. I thought I could try going out earlier in the day, but the interstate was slippery and I started fish-tailing before getting too far, so I turned back disappointed.

But after the sun was out for a while and I'd eaten lunch, I was feeling more confident and suspected that the roads might be better. They were. The sun had helped melt away the ice and I drove out to the farm on this cold but nice winter day. All bundled up, I stayed warm on my walk out in the pasture to bring my boy up to the barn. Inside the old barn, I gave him his supplements and the little bit of sweet feed that helps the medicine go down. Vitamin E is invaluable for him, especially for muscle recovery when he's out in the cold weather. A little SmartGut Ultra doesn't hurt either.

Nature has certainly upped the ante on the weather tolerance. My boy has finally become a fluffball: 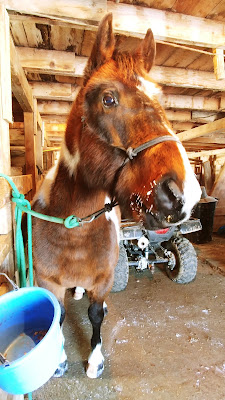 He could get fluffier, but I'm glad to see that he has this much. He and his herd were playing when I walked out to catch him, so that was good to see also, as was the belly he's keeping through this time, the coldest period of our winters--January and February. He's doing well, but I still feel guilty when I don't get out to check on him.  Spring is going to be a pain, though--a lot of that hair ends up on me.

But for now, I'm happy because Buddy is happy, even if he's "roughing it". I've learned that the best care for a horse physically and mentally is what is natural to them. He has a pretty good life!
Posted by manilles at 9:30 PM