I hope you enjoyed yesterday's post. Baxter Black was a rare treat when I was growing up. Where I live, we had Rodney Nelson as our local cowboy poet. I recommend anyone looking for a good story and a laugh look up more on Youtube.

So, what else have I been up to, besides reminiscing? Working at my day job for one.

And training Buddy. It's that time of year when ranchers in my area brand, vaccinate, and castrate calves. (Don't want a bunch of little bulls running around.) Buddy is ready to help round up cattle now. He's becoming a real cowhorse, as I posted a couple of weeks ago. The big test is coming up. All the commotion and comraderie of neighbors gathering to help each other becomes a working party. It's a simple life well lived. But for a horse, it can be a bit frightening initially. We'll see how he handles his first branding roundup this spring. 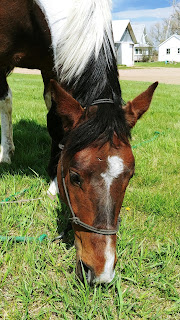 And I'm excited that my brother and his family will be home for the branding also. Farm families are some of the closest knit families you'll ever meet. We rely on each other. Granted, like my brother and his family, who live in another state, I don't actually live on the farm/ranch anymore, but it's still in our blood. My sisters still live and work on the farm with their families, and my brother and I both wish we could too. Alas, our lives have taken different routes, but home is home. There's a peace about the open country where the closest neighbor is a mile or two away. There's real freedom in that, and it's a balm to the soul. Getting back to my roots has provided the greatest healing for me.

It's that peace that lets me regain my writing focus. The long drive to and from the farm of my youth gives me lots of time to think and clear my head. I've been using that to work out details of whatever story I'm working on. Because of that, the writing has been going well on #4 of Starfire Angels: Forgotten Worlds. Yes, #4 already! I like being two books ahead of the one I plan to release. And the shorter lengths keep me from getting bored.

I am really enjoying the way this series is going so far. The first draft of #4 (title TBD) is halfway done already. As I mentioned last week, I met a new character in this one who really intrigued me. He was exactly what the series needed, and I plan to keep him as a regular character from this point forward. I have a working title and a cover image, but I'm not sure if the title will fit by the end of the story. If I was as sure as I was with Vault of the Celestials, I would announce it here, but it looks like that announcement will have to wait until the end of June. Ironically, VotC (SA:FW #3) was an easy title and cover but a hard book to write; now, #4 is pretty easy to write but difficult to title. That's writing.

Speaking of June, THE RULE OF YONDER will be available June 20th. I'm going into final edits on that this week to have it ready in time to go out to all the retailers. I hope you're as excited as I am!

Despite their narrow escape from the Issan, Zaer's starship, the Da'Nelgur, was severely damaged. Vel and Shen have tried to fix the hyperdrive, and Nya is sound asleep. Their only chance to repair the ship to continue their journey to Ethal is a crime-syndicate-run remote city in interstellar space.

Yonder Station is not a place where anyone with sense wants to stay long, but it has its advantages. A home to salvagers, dealers, hustlers, and assassins, it is also a valuable trading post for the fringe of the galaxy, especially for information. The latest news is the Da'Nelgur's involvement with the Issan and the mysterious portals.

When Zaer is taken by one of the crimelords seeking what she knows about the portals, it's up to Nik and Nya to rescue her. But that same crimelord wants them too. To rescue Zaer, they'll need to avoid being captured while tracking where she might have been taken. What they discover could get them killed, or it could gain them powerful new allies. What could go wrong?

Amazon
Apple
Barnes and Noble
Kobo
and many others