I have a cowhorse 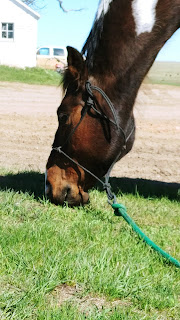 Yay, Buddy! He's finally getting there. This winter changed him. Well, it wasn't just winter, but how he lived this winter and my care through the winter. The experience changed him for the better. The farm has been exactly what he needed to get over his nerves. He was always a smart boy and clearly has some foundation Quarter Horse, based on his conformation, even if he doesn't have registration papers. That should equate to a calm boy. Unfortunately, he hadn't had the experiences that he needed to start accepting new things and getting over his fears.

Buddy has come so far since I took him out to my family's farm. Being around cattle and all the big tractors, Rangers, pickups, trailers, stacks of round bales etc. has taught him not to be afraid of every little thing. And my regular handling has taught him that he's okay without his herd nearby. He's FINALLY carrying that through under saddle now, not just when I'm on the ground with him.

Last fall, we helped sort calves for weaning with him in-hand for that first experience. He started out nervous, but by the end was excited to go after the cows. Today, we rode with the cows for the first time and, except for a moment when he wanted to buck and play instead of canter (easily corrected, because he's not mean-spirited at all), he enjoyed it! He was even walking on a loose rein. I like to do some dressage work, but I've been trying to let him go off the contact and encouraging him to relax. The only time he started to get anxious for his friends was coming over the hill back to the farmstead. That was the first time he whinnied during our whole ride, which means he was pretty occupied with our ride up to that point and not worried.

We didn't focus on dressage today, except to correct him from dropping his shoulder, but focused on western riding in our new saddle. (A special pad with back shims and using the special Circle Y 7/8 cinch position were the answers to freeing his shoulders) He'll be ready to join the big boys rounding up cattle for working calves in three weeks.


And after our ride, I took him to the grass for a treat. I was able to drop the lead rope and let him graze while I played with the dogs. He didn't look around anxiously for his friends like he used to do. I could barely get him to enjoy the grass last fall--he was always worried about where his friends were. He's never worried about stepping on his lead, which doesn't phase him in the least. He just moves his hoof until his head is free. I have an awesome horse who just gets better and better with time and training.