my Buddy and me

I think I overdid things yesterday. After a pretty good ride on Buddy, I trimmed his hooves. Today, I'm sore and extremely tired. Getting older sucks. I can't bounce back like I did in my younger years.

But I had fun getting to this. I've discovered more about Buddy, and he's learning more out on the farm than I ever could have done with him at a boarding barn with limited riding places. I've regained some confidence, even in the face of his getting a bit wild at times. He wants to play when I ask for a canter, but he's been a bit cooped up yet. Until the cattle get moved, the horses are in a paddock. Once the cattle are moved to summer pastures, the horses will get their pasture back.

But who am I fooling? I know Buddy. He'll still be mister wild child when he feels like it. Fortunately for me, he's also easy to control in those moments. But just to be cautious, I'm switching out his normal loose ring snaffle for a pelham with two sets of reins. I used to do that with my warmblood, who was far FAR more athletic than Buddy could ever be and dangerous when he had too much energy. The pelham bit gives me a little extra control when I need it. I learned to use two sets of reins before I ever started my warmblood in a double bridle. With Buddy, I'll have that shank rein for leverage when I need it but will usually only use the snaffle rein. Yes, he's been feeling like he could get out of control at times when we're riding. So far, I've been able to bring him back, but I'm too old to deal with a runaway. It's only when we're cantering or trotting that he gets a bit headstrong.

We're cantering more and more now too. We hardly did any canter until this spring, but the hills have been helping him learn to collect to carry a rider at a canter. Yesterday, we cantered circles on flat (although rough) terrain. He's learned from all of our lateral work how to listen to my body to pick up the lead that I want, which is pretty amazing; but he's always been very smart.

Also, I've been having to learn how to sit on him. Sitting the gaits is different on each horse, depending on their build and the saddle structure and fit. I'm figuring that out on him the more I get him to canter, and he's gaining confidence and roundness very quickly, but I suspect part of that is because he's depending on me holding him up in front. That will change in time. It's so much fun experiencing his development.

Last of all, this spring has been a cold one, but he's finally slicking out. Just a little winter hair left on his nose and ears. My little dressage/trail/cattle horse. 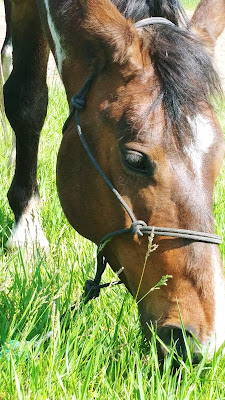 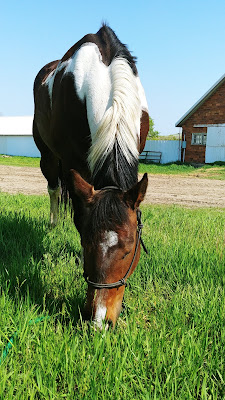 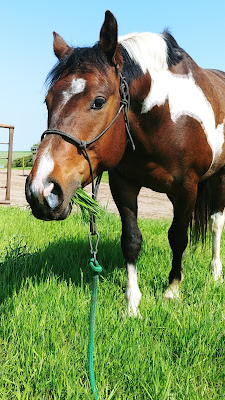 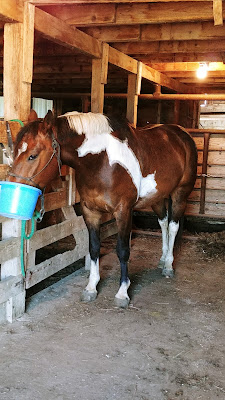 ps--It was too muddy and he was too ornery for me to feel safe riding him at the branding last weekend. But we observed from the ground. He settled in to the commotion quite nicely, even if he really wanted to run and play when given the chance; but he couldn't because he kept slipping on the wet grass.