the dog days of summer 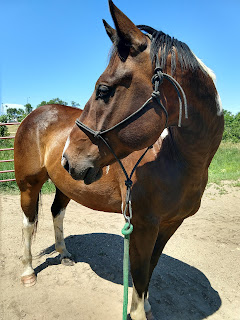 We had a busy weekend, or at least I did. Saturday, I kicked my family out of the house to clean the garage. The mid-morning started out hot already, which was why, after pulling out as much stuff from the garage as we could and sweeping out all the leaves, dust bunnies, and insect carcasses, my youngest child kept asking me to spray her legs while we hosed and scrubbed the floor. By the time we finished cleaning, the temperature in the garage was almost 90 F and we had a fan going. The kids chickened out on us by then, so my husband and I finished the task of putting everything back. I had to wait for the floor to dry, while he built a quick shelf in front of where I park my truck; but that shelf allows more stuff out of the way and still leaves me room to fit my pickup so I can walk around it. A lot was rearranged. He and I worked in the garage a total of at least five hours. It was a long day.

Today, I started out tired but made the drive out to see my Buddy. I haven't seen him in two weeks because of weather and not feeling quite right. Today was blistering hot again with barely a breeze. I didn't ride, but I did check over my boy and gave him some treats. Afterwards, when I turned him out in his pasture and expected him to hightail it back to his friends, he surprised me. Instead, he followed me back to the gate with a look of "Aren't you forgetting something?"

I wasn't actually forgetting anything. I had just decided that he didn't need any body work, and I was already soaked in sweat just from the walk leading him in from the far side of the pasture and then brushing him off and picking hooves. So, figuring he wanted a quick work of his main problems, I went in and put my hands on his face. As soon as I did, he was yawning. It didn't take much, but I knew when he was done and happy. I said my farewell, and he meandered towards his friends--it was too hot to run.

I learned from my sister that I sometimes have a horse of a different color--apparently, Buddy likes to roll in the mud. I've seen her horses do it too. It's likely as much for natural fly protection as well as to cool off. Pasture horses know how to take care of themselves.

It's also haying season. Lots of cutting, raking, and baling going on right now. We pray for a few days at a stretch without rain so that the hay can be put up properly.

It was a quick trip, but I also delivered some goodies for the younger nephews and niece, toys that my kids no longer wanted or needed, which had been taking up space in the garage. And there were a few other items that my parents and sisters and their families could find useful. Now, if I could just get those old horse blankets and sheets sold, that would mean more space saving.