What a gorgeous day to be alive! It started out with me feeling off, but by the time I reached the farm, I felt alive. That fifty mile drive can work wonders. 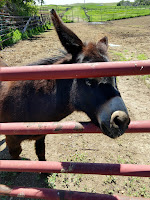 Although my family was all in town for the annual festival that's not the county fair (that comes in two weeks), I enjoyed the day with my horse. Like me, however, he was shocked by my sister's latest addition that's not yet in the herd, a new mini donkey, a little jenny she's calling Jewel. Buddy snorted and wanted to flee when she came across the corral towards us, but then she was more afraid of him by the time she reached us and he seemed to realize she wasn't going to hurt him.

I love those big ears!

I should have taken a picture when Buddy had his neck arched and extended in that way horses do when they're curious but ready to run away if necessary. It's that look you see in Arabian poses. Even stock horses can be just as beautiful.

After he settled down from the new addition, I took him into the barn and tacked up for a ride. Today, I remembered the Amigo Fly Rider, which I had bought years ago for a bigger horse. He loooved having that on, because it kept the bugs off! And they are bad. It's that time of the year where fly spray doesn't cut it. He was so much more relaxed with the Fly Rider on than before we tacked up. Plus, with all the rain we've had this year, the mosquitos are atrocious, especially near the dugout pond and the trees and in tall grass. Thank goodness most of the grass is mowed for the first cutting of hay. If this rain keeps up, they'll get a good second cutting too.

I lunged before I rode today. It's been 3-4 weeks since I really rode and I was alone, so I wanted to play it as safe as I could. I tried 2-3 weeks ago but the weather had Buddy nearly flipping out, so I managed only a few walk circles in the yard that day, just enough to get him to settle down and not try to run away.

Today, the equipment was gone from the patch on the east side of the quonset, which has a slight incline, and the tall grass that was cut last weekend was gone (baled up somewhere), so we had a nice place to work right in the yard. Since no one was there except me, I figured I'd play it safe if something happened. Nothing did, except an excellent ride.

And work he did! Buddy was so awesome. I can't believe how he can go a month without being ridden, then we ride and even advance in our training as if we'd been riding every day in between. It's crazy fun when he does that, although I'd prefer that we had more riding time. Nevertheless, he's gone from being afraid of me on his back at a canter to picking up almost right on cue and carrying himself like a pro.

Part of that is because we started really working with haunches-in this last spring. I started last fall with a little of it, but this spring, he's really picked it up. And it's made a HUGE difference for his balance. Between haunches-in to straighten him and learning to canter by cantering up the hills in the pasture, he's made leaps and bounds into first level work where only a year ago he was just okay for introductory level dressage. That's a big step in training with barely any riding. He can even canter on a slight decline with me now.

He's in a quarter-section pasture with his four pasturemates (soon to be five) with lots of hills and rough terrain, so he does keep himself in relatively good shape when we don't ride. Dressage work, however, is a little more demanding. He's advancing quickly, though, and that pasture life really complements my training well.

Today, I asked for just a couple tiny steps of walk half pass, just to get him to start thinking about it. It was difficult, but so was leg yield when we first asked for that. Now, he can trot leg yield like he's a professional dancer, which is the best analogy of dressage. He's very attentive to the aids too and rides almost right off my seat for most transitions and some movements, which is exactly what we want for any riding discipline. That will only improve, and then there's something magical when horse and rider feel as one mind and one body, but that's the goal of training.

And I noticed some other things about Buddy. He's matured. He stands level or even a little uphill (yay!) and he actually changed in many other ways. His neck is more refined and longer looking. Also, although his head still isn't a "pretty" head, he's grown into it and it doesn't look so blocky ugly anymore. It's almost like he was the ugly duckling that grew into a swan. There's something special about him now that he's hitting full maturity.

And after a ride that left me glowing with pride, I trimmed his hooves. I had three done and the fourth was difficult, because he kept wanting to itch his butt, first on me, then on the manger door near where I tie him in the barn. I figured he must have worked that area of his body extra hard in our ride and finally decided to interrupt the trimming to work over his body with the massaging curry comb and then put some liniment on that area bothering him. That seemed to settle him down so I could finish trimming the last hoof.

He ended as a happy boy and me as a happy horse mom as his friends greeted us at the pasture gate when I turned him out again.