I already mentioned this on my MeWe page, but for those who aren't on that social media network, I'll bring it here. I always try to include both when I have something I feel might be interesting to readers.

I just wrote the synopsis for Forgotten Worlds #7. I didn't have an idea for that until thinking about something after church today. When I sat to write one idea, it totally morphed into the perfect adventure and another book in this series that is heavy in the overarching series plot. It's so weird sometimes how creativity works. You think you want to do one thing then get going on it and it completely surprises you. I love it! (In this case, it's just the plotting stage.) And this couldn't have worked without the new character I've add in #4 (coming December 19!).

It seems like the odd numbers so far are heavy on the overarching plot and the even numbers are side adventures still in the series plot but much lighter in it... So far. Things could change, but not for a while. #8 is going to be the Orast Belt plot I mentioned on my blog a while back. Even that plot will be a little different than what I had planned but it will be a lighter plot again. It's going to be so much fun!

I have ideas for over 20 books. I don't know exactly how long this series will be, but I know the final handful of books will be heavy on building up to the finale. In other words, no "fillers" or side adventures when it gets down to the wire.

So, once I get through the current editing passes of #5 and #6, I will begin writing #7. By then, the idea will have time to settle and shake out and the gaps I left for optional action and diversions will have time to develop.

Book 5 will be The Destruction of Walls (front and center below). I will probably schedule that for release in mid-March. 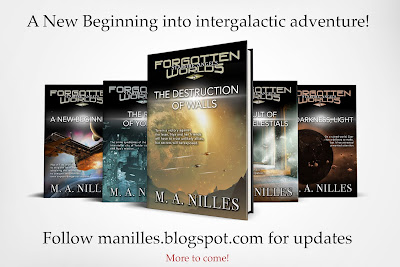