Dargo was snoozing on the dividing wall between the front room and kitchen. The first is with the light on and the second is before I turned the light on. He isn't crazy about real snow, so we'll let him enjoy the fake stuff.

I'll probably regret saying this, but our cats don't bother the Christmas tree, except to play under it, but we learned not to hang ornaments too low. And it's a fake tree, so no worries about needles or fires. They just don't have any desire to climb, although when they were kittens, that was a different story. 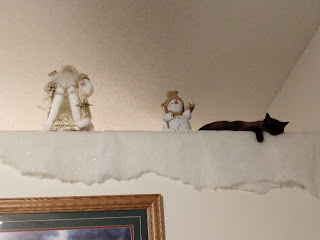 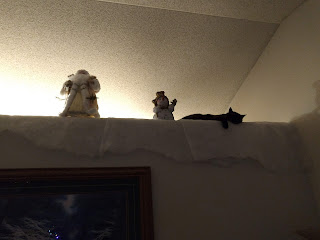 Email ThisBlogThis!Share to TwitterShare to FacebookShare to Pinterest
Labels: cats, just for fun