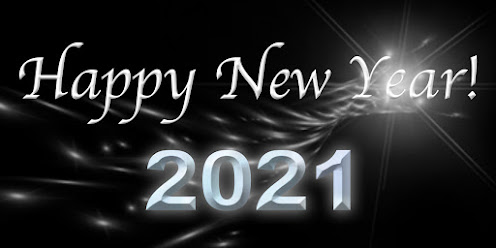 It could get worse than 2020 but I'm an optimist and look forward to a 2021 that will be better than the past year.

I woke up to heavy fog this morning, which has, as of these pictures at 11 am, lightened enough to see more than a few feet away. 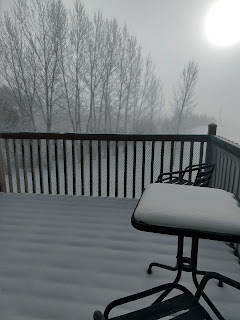 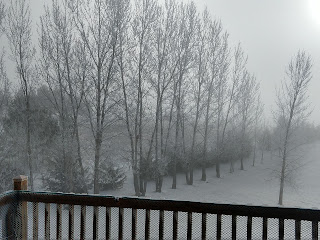 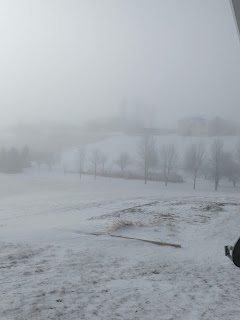 The crystalline glow of hoarfrost is always a beautiful remnant of winter fog. Once the fog lifts, that hoarfrost will sparkle and glisten, creating a magical surrealism over the world... until it melts off. It's a beautiful start to the new year!
I'm also glad we finally have snow on the ground. The second half of 2020 was drought for my area. Water tables have lowered and water dugouts for livestock are nearly depleted.  We finally received this snow a few days ago. While it's not enough, we'll take it. It was enough for the kids to have some sledding fun.
And inside, I have been growing this over the past month:
I had to put plastic around it because one of our kitties took to chewing off the leaves and killed one sprout and nearly two others. Those two, with regular watering quickly shot up to over three feet tall from the soil surface to the top and continues. I think these tomatoes love their mini-greenhouse made of that heavy-duty plastic. At least, they love not having a cat chew on them, and so do I.
Tomato greens can be toxic to cats, but Jack, being Jack, never showed signs of discomfort that we could see. He's our dog-cat. He eats everything, so we have to be careful. We did plant some kitty grass for him in a little potter after he went after the young tomato plants, and he LOVED that! Unfortunately, he also pooped out grass, which doesn't digest and caused him to have poop hanging from his butt. 🙁
Such is life here. We should have fresh tomatoes by the end of the month and will soon start some more indoor veggies. I hope Jack doesn't chew on those... cauliflower, radishes, and spearmint. I may even plant a head or two of lettuce if I have enough room in front of the the deck doors.
So, we're keeping an indoor garden. In one of the pictures above, you can see our regular garden plot. We've been taking out food waste to compost this spring. We have a pail under the sink to dump egg shells, banana peels, and other plant waste to take out and dump to add to our compost, although it appears that something is coming around to eat on some of that, which is fine too. We have wildlife in our rural neighborhood.
As I get older, I appreciate growing my own food more and more. It's a hobby with fruitful results. 😉
Posted by manilles at 11:38 AM