Having Hashimoto's isn't fun, but the people who hang out on forums are great. We all have our own level of suffering.

Being on the AIP diet and further limiting it depending on my level of histamine tolerance can be depressing sometimes. But it works to keep things under control.

Many of us on AIP do so out of necessity, but others sit on the fence or turn up their noses. It is difficult and feels limiting, but you learn to cope. Part of that is finding new recipes and trying new things.

One of my favorite dishes is basil chicken. I'll put a breast in a pan with some coconut oil and maybe some olive oil. I'll then sprinkle Himalayan or sea salt on it, a little pepper, and a lot of basil. Cut up some onion, mushrooms, and green onion and let that cook on the stove top on low and covered until the top turns white, then flip. If the heat was right, it will cook inside and be a light brown on the bottom. After flipping cook for a while longer, until the basil covered side gets light brown on the meat.

After the chicken is cooked, I'll sometimes toss in some zucchini slices or zoodles and/or asparagus for a few minutes, long enough for them to pick up some of the flavor from the chicken, onion, and mushroom juices.

And lately, I've been adding a side of cauliflower mash. It has become my new favorite mashed potato replacement. I can't have dairy, but this doesn't require dairy. I simply steam some cauliflower with a little bit of yellow onion until it's about ready to disintegrate. Carefully drain of excess liquid and then puree with a hand blender and...voila! Looks just like mashed potatoes. Sprinkle on some Himalayan or sea salt and toss in some chopped green onions and it's too die for.

The results of the chicken and cauliflower basics: 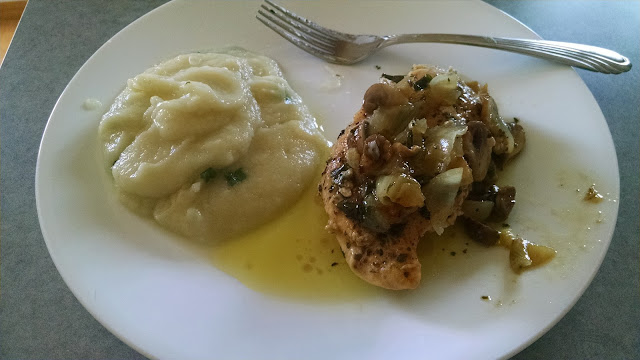 (The yellow is the olive oil and chicken juices from cooking the chicken and toppings and is great for dipping the chicken into.)
Posted by manilles at 2:31 PM