That was my attempt at playing on this post and turning it into beat boxing.

Never mind, then. I'll get to the point.

I've been working hard to finish Eternal, the third of The Luriel Cycle trilogy. I finished the first draft of Enlightenment last fall, did major edits at that time, and then began writing Eternal. When I'm done with this first draft, I'll go back to Enlightenment and make the final edits. I hope to release Enlightenment in June of this year with Eternal following up in August or September.

Then...I don't know what I'll do. Maybe go back to one of my other works. I'm surprised by the requests I've had recently for a sequel to Legend of the White Dragon. However, I really want to return to my characters on the fictional world of Derandria. I could also return to more Starfire stories, or I could start something totally new. I'm not sure where my muse will take me. I live in the moment of whatever story idea grabs me when I'm available to write it.

Until then, I'm enjoying the lessons of the Shadow Realm with Lilly and the other characters of The Luriel Cycle stories. The drama is done and she's been on the run to reach Darrac, making new allies and confronting old enemies.

I am hoping to finish the first draft of Eternal by tax day. With my part-time job, family responsibilities, animals to care for, and taking care of myself, writing doesn't always happen at the pace I'd like.

When I'm writing, I usually end up with a cat or two on and/or next to me. Many of my pictures end up on my instagram account @melanienilles_author, but not always ... 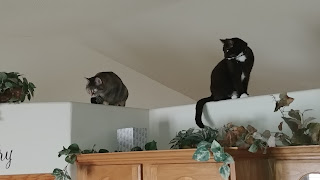 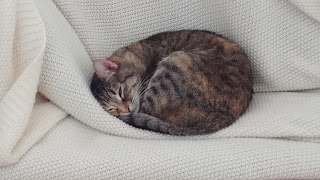 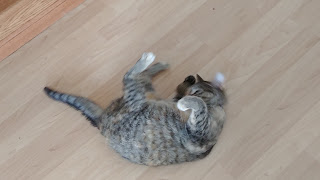