Yesterday, I started Buddy on cows, and I see a lot of promise as a cowhorse.

On my family's farm, he's seen them up close in the last couple of months but has still been hesitant about being close. So, yesterday he got immersed in over a hundred cow/calf pairs. He helped us sort (in-hand with me doing the actual work), splitting them and effectively weaning the calves.

So, I took it easy with Buddy. I was going out to just see him--it was cold but I had bundled up--and saw that my sister, brother-in-law, and stepdad were still sorting when I arrived. I asked my sister if she minded me helping with Buddy in hand. She didn't and took some pics for us to share. (I think she was just glad for an extra hand with the work.)

At first, Buddy was dancing and carrying on, in his listen-to-your-handler way. He's good that way--his ground manners are great after all the natural horsemanship we've done. (You can't tell in the pictures below.) But he didn't like being away from his herdmates and being surrounded by bellowing bovines. After two hours, he was running alongside me to separate the stragglers who refused to cooperate and even started running ahead on the leadrope towards a cow I was heading towards at one point, rather than trying to get back to his herd. If we were standing back, he'd get impatient and paw and whinny, but towards the end, his eyes were more on the cows than his herd. It got to be that he got very focused on chasing cows as he realized they moved away from him and that we were doing a job.

This was a very good introduction to cows for him and very positive. It was also a safe way for me--on the ground with him rather than on his back. He was able to follow my lead and see that I wasn't afraid. I believe he gained a lot of confidence.

I've learned the hard way that horses that aren't introduced to cows in a good way can freak out about them. It's made me appreciate just how good my horses were when I was growing up on the farm. Boarding my horses at facilities closer to where I live as an adult has been a convenience in many ways, but it also limited the experiences of my last few horses. 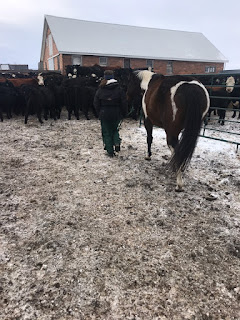 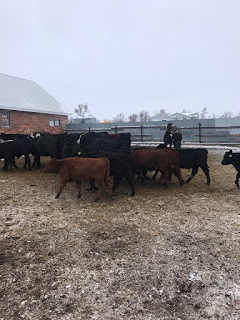 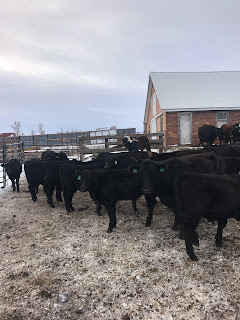