I get lost what day is what often enough that I was planning the middle of August to be in two weeks instead of three. I have so much going on my head is spinning. I blame the thyroid, but I'll spare you the details of living with that issue. 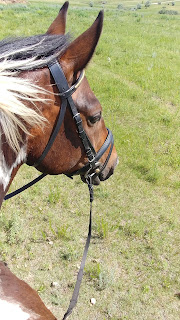 I've been stressing for several months about my horse since the owners of the place where I pay to board put it up for sale. There aren't many options here and I didn't want to put that on my parents, who have a farm/ranch 50 miles from me. Then, something happened to ease my worries--this summer, a place advertised to take in a few boarders, one where I could ride out of the weather and bugs. The only problem is the price and that my little pasture pony will have to get used to being in a stall. He won't have his herd. However, living in a stall with daily individual turnout I've found tends to make horses more reliant on humans for companionship and more confident in their humans as leaders. They don't rely on other horses so much for cues on how to behave. This could be a good thing for he and I, although it is still a long drive from my house while being close to my day job.

I haven't even been able to focus much on riding on the days that would work (a modest breeze to keep the awful flies and mosquitos reduced but not too windy and not too hot). At the new place, I won't have to worry about anything except the rare severe thunderstorm and snowstorms. The ride last Friday was a rare treat where I have been boarding.

I'll be moving my boy this weekend, before this cool weather leaves us and summer returns. Once that's done, one worry will be off my mind, except paying for this very nice boarding situation every month.

Another issue I've been dealing with has been recovering an old series. The five-book Dark Angel Chronicles are getting a makeover. I'm hoping this is the final look. It has to be good. Cover artists are not cheap, especially the good ones.

All this has taken my attention from editing Eternal. I'm still working on that. The edits are getting less and less and I'm past ready to be done. It has been three months since I finished it and I've edited four books now, this being the fourth. I had also done final edits on Enlightenment in this same series and re-edited Tiger Born and Spirit Blade because it bothered me for a long time that they needed another coat of refinement, small things but many of them. I don't think I need to do anything more for those. I still enjoy them very much.

And I've now had at least six passes through Eternal and have rewritten everything to some degree. I don't think it will need anything more after this latest. I am 2/3 done with this round and it is very readable with few changes needed. Reading in different formats (paper, computer, ereader) all reveal different issues. I don't know how good it is but I know that it wraps up The Luriel Cycle very well. The series evolved as I was writing it, but part of that was me changing because of the thyroid as I mentioned above--it influences everything, even our emotions and sleep. And those play a big part in writing.

Around those bigger projects are always the day-to-day tasks--work, cats, family needs, doctor appointments, exercise time, etc. Friends have said they don't know how I can do it. Sometimes I don't know either. I just give myself time to relax in between. I think that is how I do it--by setting up time slots for everything and just making the task of that slot a priority. I have to, because life is complicated with thyroid disease, which makes everything more difficult. The glue to keeping it together is regular exercise and a family who isn't too demanding.

Soon, Eternal will be done. With all luck, maybe I can finish this weekend. Otherwise, by the middle of next week. I have to finish--I've been away from writing too long and need to get back to it asap.

ps--a lot of these pictures are shared on my Instagram account @melanienilles_author.
Posted by manilles at 3:38 PM