where has the integrity gone?

I'm calm now, but an hour ago, I was fuming. Why? Because of auto insurance.

About a week ago, the same day that I was out seeing Buddy last (see my post before this), while I was taking care of Buddy in fact, I had my pickup in the pasture with me and the horses. My sister has three horses, a pony, a mini, and the mini donkey in that pasture. Buddy has a nice little herd of friends. Apparently, they like him enough to stay close, as I described in my last post. What I didn't mention in that post is that they stood near my truck, which I had parked right outside the portable corral after driving across the pasture to get to him.

Here's the thing--I figured the horses were just trying to stay in the shade, or as much as they could, so I let it be. While I was tending to Buddy, I heard a horrifying sound. I knew that sound from years of horse experience.

I jerked upright from where I was scraping off botfly eggs on Buddy and ran to the "gate" of the panels and chased the horse's away from the front of my pickup. And I looked and saw exactly what I had expected: 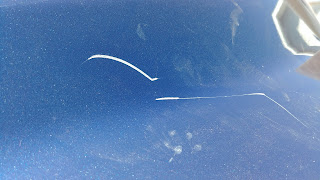 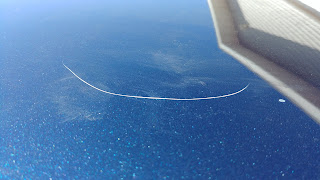 Those are some of the scratches in my hood from horse teeth. It appears that they ran their teeth along it after licking off the dirt. They also made a short but deep scratch on the passenger side door, which I later found.

There are two reasons I can think of for my sister's horses to do this: 1) boredom and 2) gum pain (likely caused by botfly larva, which burrow through the gums to get to the digestive tract and which are atrociously active out there). Or maybe a little of both.

But I wasn't mad at my sister or her horses. I was mad at myself initially for taking my pickup into the pasture. It was my decision and I've been around horses for over 35 years, more than long enough to know anything is possible. That's not why I was fuming today, though. That goes to what followed.

I took my truck to a shop I trust to get a quote. Total for the door scratch and hood: about $1231. Apparently, part of one scratch goes so deep that it caused some denting.

We checked with our insurance comprehensive, started a claim, and found out our deductible for that would only be $100. Yay!

Except it came with a catch. Stupid me for thinking this was going to be easy. When the claim rep asked whose horses put the scratches in, I was honest and said my sister's horses, never expecting what would come next. She asked for my sister's name and phone, which I provided. All the while, a little warning siren was growing ever louder in the back of my mind.

I finally heard that siren clearly enough to acknowledge it, so I asked what they were going to do with the information... They planned to get her insurance and submit it to them to pay.

WTF!? This wasn't a vehicle collision. This was comprehensive. I was immediately pissed. How could they go after her auto insurance for something her horses did? How could they even go after anyone? It was horses, for God's sake! This was my fault, not hers. I made the decision to park my truck within their pasture.

I was ready to ream whoever's stupid ass idea it was to do all they could to not pay a simple claim. I love my sister and I know she doesn't need that hitting her. I come from a close family and we stand with each other; we don't let little things come between us. And what's more, that family is giving my horse a place to live free of charge. This wasn't malicious. It wasn't intentional. It was just bad circumstances.

F*****g insurance companies! This is what's wrong with this world. I was taught to take responsibility for my actions, and they wouldn't do that, nor would they take the responsibility that we pay them to take on.

So, I did what a good sister does and told the claim rep to cancel it. I'm paying this out of pocket as a lesson learned. I won't put that burden on my family, and neither would my husband. Some of us actually have some integrity and decency. It won't be easy to pay, but I won't risk my sister's insurance rates going up for something that I did. I'd rather that I would have lied about the horse and said it was my own, and I don't like lying either. Had I known what would happen, I would have.

Why do we pay insurance if they can't pay a simple claim? This showed me what's wrong with that whole industry. We've become too litigious as a society and too ready to blame everyone but the man/woman in the mirror for our own mistakes. Well, I own up, and I'm proud of that, just as my parents taught me. I'm paying this out of pocket now, but at least I won't have sold my soul to the devil.
Posted by manilles at 1:16 PM