I'm more comfortable in my dressage saddle, and it's easier to carry to and from storage, than my western saddle. Granted, both are basically custom fitted, but my right ankle kills me when I ride in my western saddle. Otherwise, either one is fine for Buddy, but I prefer my dressage saddle, even if we're riding out among cows. I train Buddy in dressage, which has helped him make the adjustment to being a cowhorse, which is why I call him my dressage cowhorse.

I don't know if Buddy finally hit the age of maturity mentally as he has physically or if the farm has changed him, but this spring, he's been showing me a calmer side (at last! It's only taken 4 1/2 years /sarc). He's seven this year, officially a fully mature horse. And he's finally decided that we can go out on a loose rein and not have to fight each other because he's freaking out being too far away from his herdmates.

Granted, a lot of the change is simply consistency and patience in training him, but he's even walking through mud or uneven footing for me without much fuss. He used to freak about that and try to avoid it, even as recently as last fall. This spring, he's marching right through mud to move cows.

And he loves cows! I swear that moving cows gives horses the confidence for anything, or nearly anything. Having an animal as large as them move out of their way... Whoa! Mind-blown (for the horse). When they finally accept that those cows don't challenge them, something changes. Buddy just took a year and a half to reach that conclusion, but at least he's gotten there. It's a huge confidence boost, but so is learning to trust a rider, which he can only feel and not see.

Buddy is a reader--he likes to see his leader (handler) to read body language as indicators of how he should feel. He's only slowly come to trust in my feel on his back to determine how he should feel. In other words, he's generally not a very confident horse, so anything I can do to help him gain that has been the key to training him. First, they learn that in ground work. Then, the harder challenge is to carry that over to under saddle, where the leader is riding and out of their site. Because of Buddy's nervous personality, it has taken him longer to get to that higher stage. A ridden horse feels more alone, and a horse like Buddy who is a middle-heirarchy herd personality would rather have a leader he can watch for cues about how to behave.

It just takes patience, time, and consistency. Buddy is getting there, finally. I'm so proud of him for how he's blossoming into the horse I always knew he could be. Today, I lunged him in side reins, and, although we haven't done that in a couple of years, it really helped him rediscover his balance and lift his back. Then, the wind decreased, so I rode in the same uneven, grassy area where I had lunged (where he's grazing in the pics below), and he was just as good. In fact, he was better than he's ever been, even cantering on both leads without any fuss. I was going to quit there after such a superb ride (for him) but the wind was so low and he was so good that I decided on a little trail ride out checking cows. After a little fuss to leave the gate, he went out on a loose rein, although he leaned towards home.

We'll be doing more with the cows this spring and he's definitely ready for the work. He's shed a lot in the last few weeks--not a shaggy yeti anymore--but still has a lot to shed out. Today, his mane got a trim so it doesn't tangle so much. He needs a lot more work to lose the winter belly. As a reward for being such a great boy today, he got an extra helping of grain and the chance to graze on the green grass growing after a smidgeon of rain the other day. (We really need much more rain, just not like last summer.) 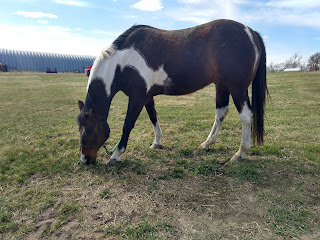